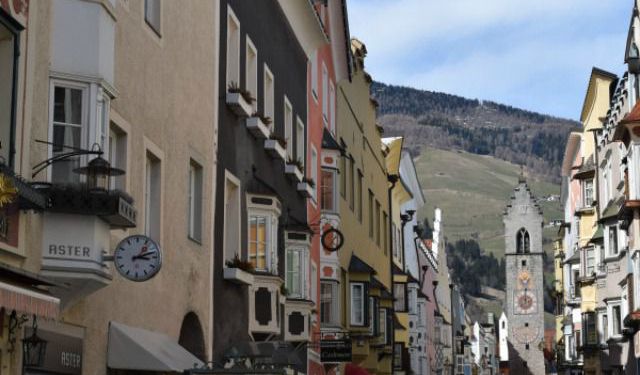 The Town Left Over the Wrong Border, Sterzing, Italy (B)

This is one of the most attractive towns in the region trapped in the ‘wrong’ country, i.e. South-Tyrol. This region has a complex and moving history (see A Nationality Trapped in the Wrong Country?) and was once part of a larger German-speaking area. After the war one half was annexed by Italy, and there were many brutal but ultimately unsuccessful attempts to ‘italianise’ the residents. Thus there is now little part of Austria seemingly misplaced in Italy. The population is German-speaking, Italian is spoken with a heavy accent, and the architecture is thoroughly foreign. Most residents feel uncomfortable being labelled as Italian and will often declare their nationality to be ‘Südtiroler’.

Vipiteno is a stone’s throw away from the border with Austria and is a classic little village of medieval alpine architecture: crowstepped gables, pastel colours and pretty wooden signs. At the end of the picturesque main street is a backdrop of snowy mountains. It’s a delight to wander the main street bedecked with flowers and slip off into narrow alleyways to find atmospheric birrerie called names like Sterzingkeller. Everything seemed very fresh, bright and clean in comparison to many Italian cities… ...... (follow the instructions below for accessing the rest of this article).
This article is featured in the app "GPSmyCity: Walks in 1K+ Cities" on iTunes App Store and Google Play. You can download the app to your mobile device to read the article offline and create a self-guided walking tour to visit the attractions featured in this article. The app turns your mobile device into a personal tour guide and it works offline, so no data plan is needed when traveling abroad.