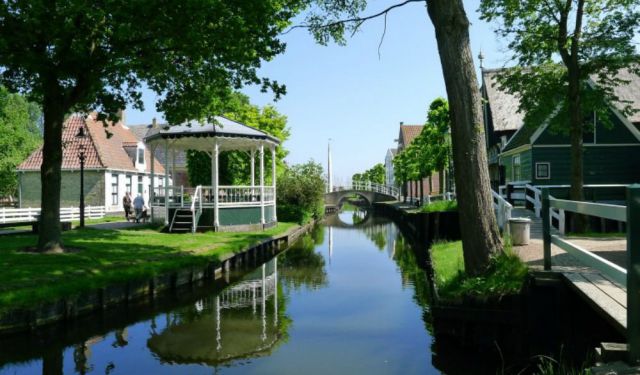 Enkhuizen is a picturesque little town roughly an hour’s drive north of Amsterdam. Although its population is modest at approximately 18,500, the town boasts one of the largest marinas in the Netherlands. In fact, back in the day, Enkhuizen was one of the major harbour towns for the Dutch East India Company.

Today, it’s better known for industries such as seed production companies and factories. But for tourists, the big draw here is the Zuiderzee Museum; a 15-acre open air museum.

One cool thing about this museum that not all museums have, is that you can get there by ferry. I would highly recommend this option. Sure, it’s just a short 15-minute walk from the train station. But the ferry is more fun, and only takes 25 minutes. Just make sure you purchase your tickets at the Visitor’s Office first before trying to board the ferry.

The first incarnation of the museum started around 1930, as a Southern Sea Fishing Exhibition. It featured cardboard houses and locals dressed in traditional costumes. But the plan to turn the idea into a proper museum was delayed by WWII. The indoor museum finally opened around 1948. Construction began on the outdoor component in 1968, though it didn’t actually open to the public until 1983. ...... (follow the instructions below for accessing the rest of this article).
This article is featured in the app "GPSmyCity: Walks in 1K+ Cities" on iTunes App Store and Google Play. You can download the app to your mobile device to read the article offline and create a self-guided walking tour to visit the attractions featured in this article. The app turns your mobile device into a personal tour guide and it works offline, so no data plan is needed when traveling abroad.