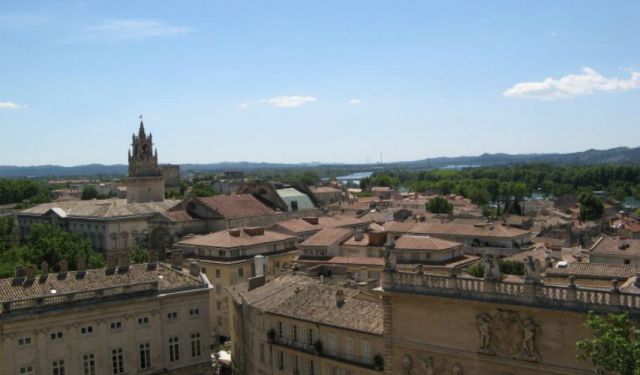 In a country that boasts a city as amazing and beautiful as Paris, it’s understandable that you might not consider seeing other places in France. Paris has it all – great food, shopping, museums, parks, and people watching. But if you’re travelling through the south of France, do make the journey to Avignon. You may be pleasantly surprised!

The Palais des Papes, or Papal Palace, is really a spectacular building. It’s one of the largest medieval Gothic buildings in Europe, with quite a fascinating history. Hang tight, because I’m going to throw a big history lesson your way!

Back in medieval times, Avignon was in the Kingdom of Arles, and part of the Holy Roman Empire. Philip IV, the King of France, tried to control the French clergy to strengthen his own position. This power play put him in opposition of the pope at the time, Pope Boniface VIII.

Raymond Bertrand de Got, archbishop of Bordeaux became Pope Clement V in 1305. Clement refused to move to Rome, and instead created a majority of French cardinals in order to assure a line of French popes. King Philip didn’t want the church involved in secular affairs, and defined the pope’s ruling authority. ...... (follow the instructions below for accessing the rest of this article).
This article is featured in the app "GPSmyCity: Walks in 1K+ Cities" on iTunes App Store and Google Play. You can download the app to your mobile device to read the article offline and create a self-guided walking tour to visit the attractions featured in this article. The app turns your mobile device into a personal tour guide and it works offline, so no data plan is needed when traveling abroad.