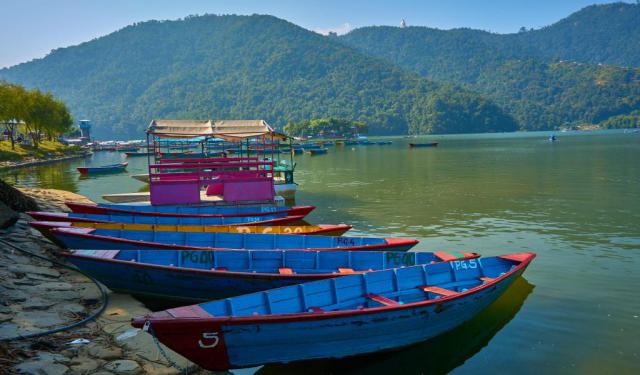 Things to Do in Pokhara, Pokhara, Nepal (B)

We reached Pokhara in the afternoon, after another bumpy ride. The ride from the last point in the mountains took us nearly 4 hours and we felt pretty shaken afterwards. So what is the first thing to do, when you get to the civilization? Hot shower, of course! once all the beauty procedures have been completed, it’s time to check out all the cool things to do in Pokhara.

Our first impression of this lively city was genuine surprise. After 8 days of quiet and peaceful mountain vibe, the streets seemed way too loud, crowded and polluted. We walked through the city like in a dream. There was too much of everything here. Too many different menu items in the restaurant. Too many shops. Too many cars. Even people.

Still, it was nice to finally let go and relax a bit. We enjoyed a tasty meal (which wasn’t dal bat), peeked at few souvenir shops and ate an ice cream. After all of that, we went back in for an early nap, as the next day was supposed to be long and eventful.

One of the famous attractions in Pokhara is Davis Falls. I wouldn’t say this is necessarily the most exciting sight in Pokhara, but the place is unique in its own way. The water forms an underground tunnel after reaching the bottom. This tunnel is approximately 150 m long and runs (30 m below ground level). The Falls got its name after an accident in 1961, when a Swiss woman named Davi drowned there. ...... (follow the instructions below for accessing the rest of this article).
This article is featured in the app "GPSmyCity: Walks in 1K+ Cities" on iTunes App Store and Google Play. You can download the app to your mobile device to read the article offline and create a self-guided walking tour to visit the attractions featured in this article. The app turns your mobile device into a personal tour guide and it works offline, so no data plan is needed when traveling abroad.