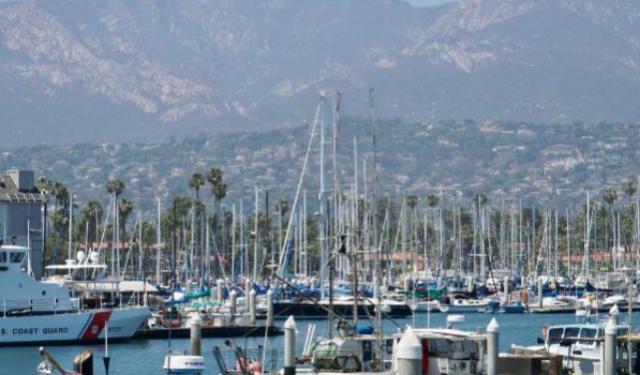 Santa Barbara, CA is one of those coastal cities that so epitomizes California living – nestled between the Santa Ynez mountains and the Pacific Ocean, there is a beauty and serenity to it that is reminiscent of the Mediterranean. In fact, many people refer to the charmed city as the “Riviera of America”. Standing in the harbor overlooking the beach and ocean, with the mountains looming in the distance, it’s easy to see why.

Santa Barbara is as relaxed and peaceful as a town might be, known more for its natural surroundings than its urban diversity, such as in its southern neighbor, Los Angeles. Some people may call it a little sleepy, which I can understand, but for a weekend visit, or a day trip (as in our case), it’s the perfect get-away. Especially for a family visit with kids, it’s the perfect escape since it’s so easy. Think beaches, parks, a harbor, great biking, even the city’s own zoo.

My family and I were lucky enough to get a personal tour of Santa Barbara by my aunt and uncle, who live there part-time. They gave us their “driving tour”, which took us all around town, down by the water, and up into the foothills. One thing I would like to note is that the devastation from the recent 2017 mudslides was very much still apparent and hard to swallow in places…entire houses swept away, destroyed, little remains. I was glad to be visiting the city at such a time, and give it my tourist and economic support, shall we say. With that, we had a really great day trip to pretty Santa Barbara. ...... (follow the instructions below for accessing the rest of this article).
This article is featured in the app "GPSmyCity: Walks in 1K+ Cities" on iTunes App Store and Google Play. You can download the app to your mobile device to read the article offline and create a self-guided walking tour to visit the attractions featured in this article. The app turns your mobile device into a personal tour guide and it works offline, so no data plan is needed when traveling abroad.