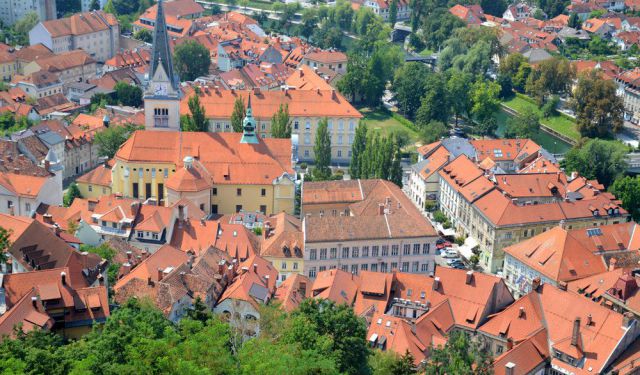 The title of this post is a bit tricky - it doesn't mean that I didn't enjoy my time in Ljubljana or that it's an ugly city. I chose this title to be somewhat controversial because this is what attracts people nowadays. In reality, it's the opposite - Ljubljana isn't too big, it's pretty, with little winding streets and for me, has the same charm as Bratislava or Riga. However, Ljubljana was our last stop in Slovenia and after visiting such wonders as Piran and Koper with red roofs and Mediterranean coast, Soca river (which was so clear that it seemed just unreal) flowing through white gorges, spectacular Slovenian Alps, magnificent lake Bled with the famous island in the middle, nearby Vintgar Gorge, lake Bohinj - shores of which resembled tropical seas, the medieval Predjama castle built into the cave and Postojna cave - one of Europe's largest, Ljubljana appeared so bleak and ordinary.

Slovenia is a tiny country surrounded by much more famous neighbors - Austria, Hungary, Italy and Croatia, all of which receive extremely high numbers of visitors. Slovenia seems more like a transit country or (similarly to Albania) is skipped whatsoever by holiday makers. This is probably the worst mistake you can make - this little country has so much to offer that it could share its all attractions with a much bigger state and still remain attractive. ...... (follow the instructions below for accessing the rest of this article).
This article is featured in the app "GPSmyCity: Walks in 1K+ Cities" on iTunes App Store and Google Play. You can download the app to your mobile device to read the article offline and create a self-guided walking tour to visit the attractions featured in this article. The app turns your mobile device into a personal tour guide and it works offline, so no data plan is needed when traveling abroad.