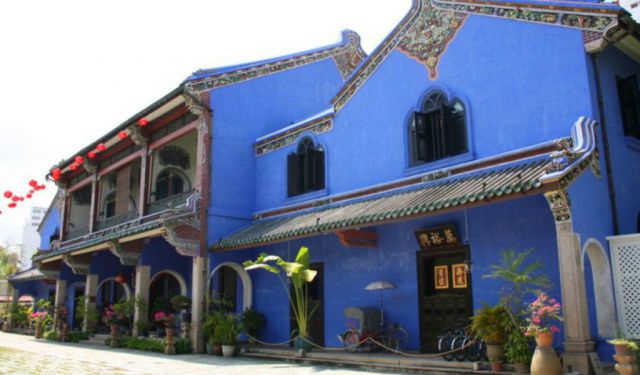 Tour of the Blue Mansion, George Town, Malaysia (B)

My work colleague actually recommended that I visit the Blue Mansion in the heritage area of Georgetown in Penang. Since “heritage” was on my agenda during that trip, I immediately did some research about the mansion and there were very good reviews. Immediately, I noted the time of the guided tour as I wouldn’t miss it for the world.

I signed up for the 2.00pm tour which costs RM16 (USD4.30). The group was not too large – about 10 of us – thus it was easy for us to get together in a small circle and listened to the interesting stories narrated by the guide about this mansion.

The mansion is actually called The Cheong Fatt Sze Mansion, and named after the owner himself, Mr Cheong. Due to hardship and suffering during the Second Opium War (mid 19th century) in China, Mr Cheong left South China for better prospects in South-East Asia. He sought his fortunes in Jakarta, Indonesia and became a shopkeeper. He continued to become successful especially after getting married and with the help of his father-in-law, he gradually established a trading company and expanded his business of agricultural products (rubber, coffee, tea) from Jakarta to Sumatra. Gradually he became a wealthy man. ...... (follow the instructions below for accessing the rest of this article).
This article is featured in the app "GPSmyCity: Walks in 1K+ Cities" on iTunes App Store and Google Play. You can download the app to your mobile device to read the article offline and create a self-guided walking tour to visit the attractions featured in this article. The app turns your mobile device into a personal tour guide and it works offline, so no data plan is needed when traveling abroad.