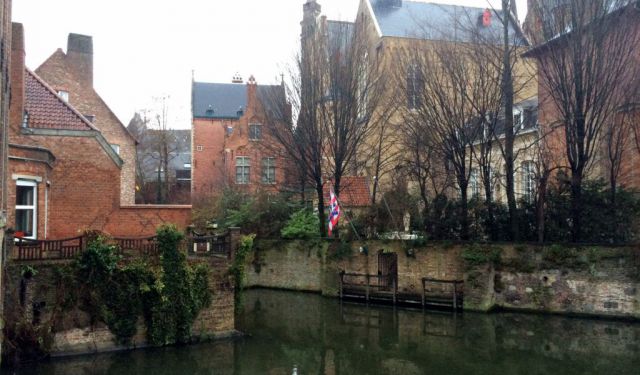 I started sharing our three day itinerary in Bruges in my part 1 post last week. Today I’m finishing out that itinerary. Bruges has so much to see and do! I have a ton of pictures to share in this post as well because we couldn’t stop taking them. We were just so smitten with this place!

After an enjoyable time spent at the Friet Museum, we headed over to Bruges City Hall. Admission to the City Hall is included with the Bruges City Card (see part 1 to read about the card).

Bruges City Hall sits in Burg Square, one of the more popular squares in the city. Part of the building that stands today was built in 1421 during a time when Bruges was very powerful both economically and politically. The building’s interior was restored in the early 20th century, and it is stunning!

After admiring the gorgeous architecture and decor of city hall, we walked through the city museum housed in a room just off of the main room.

Next door to city hall sits an old mansion that now houses the city archives and a courtroom. Called Brugse Vrije (Liberty of Bruges), it is worth the short stop to see the stunning carvings and fireplace in the old courtroom. This is also included with the Bruges City Card (and also included if you pay for a City Hall ticket) which makes the short stop seem more worth it. ...... (follow the instructions below for accessing the rest of this article).
This article is featured in the app "GPSmyCity: Walks in 1K+ Cities" on iTunes App Store and Google Play. You can download the app to your mobile device to read the article offline and create a self-guided walking tour to visit the attractions featured in this article. The app turns your mobile device into a personal tour guide and it works offline, so no data plan is needed when traveling abroad.