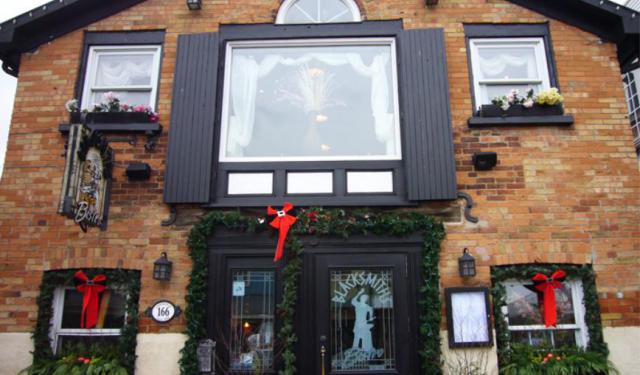 Unionville in Less Than an Hour, Markham, Ontario (B)

Departing from Scarborough, the eastern part of Toronto where I stayed with my sister in early December, Unionville was the first tourist attraction I visited on the first 3 days of my stay in Canada. She warned me in advance in order not to disappoint me that it wasn’t the best time to visit this place despite all the pretty houses. Unionville is a town in the suburb of Markham, 33 km from the northeast of downtown Toronto, founded in 1794. Nonetheless, the main street or downtown was only erected in 1840 and all the buildings remain unchanged ever since. Now Unionville is the heritage conservation district especially the main street and listed in historical buildings of Markham.

Later on, I understood why she told me so. For a town being dependent on tourism, it was extremely quiet even though I saw some cars parking in front of the stores. There were merely about 10 people passing by outside in almost an hour. Plus my sister, mom and I, altogether were 13. It was just an estimated total, but enough to make number 13 became more notorious bad luck. ...... (follow the instructions below for accessing the rest of this article).
This article is featured in the app "GPSmyCity: Walks in 1K+ Cities" on iTunes App Store and Google Play. You can download the app to your mobile device to read the article offline and create a self-guided walking tour to visit the attractions featured in this article. The app turns your mobile device into a personal tour guide and it works offline, so no data plan is needed when traveling abroad.