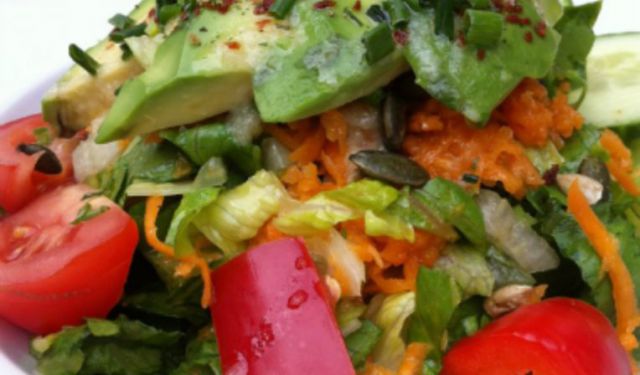 To me, Hannover is one of my favorite cities in Europe. It’s a place where the big city life meets small town Germany. Hannover has everything that Hamburg, Berlin and Munich has, just packed in a dense city center. It's a city packed with music, art and culture, and the vegan scene is no different.

One of my favorite personal quests in Hannover included tasting Hannover's thriving vegan scene. Hiller claims to be the oldest vegetarian café in Germany, selling hot meals and sweet treats since 1955. Today, Hiller has been vegan since 2012. I recognized the name Hiller because they serve food truck-style meals at the many vegan and city events in town.

Meandering west of the Hauptbanhof, we found Hiller tucked away in a residential side street corridor and nestled behind a tiny street-side café with bushes to privatize guests to the walker-bys.

Sitting outside on a hot summer day, the staff (and the nagging bees) welcomed us with a simple menu, or “speisekarte.” Nothing too complex or over the top, the menu looks basic and straightforward, but trust me the flavors burst with excellence. ...... (follow the instructions below for accessing the rest of this article).
This article is featured in the app "GPSmyCity: Walks in 1K+ Cities" on iTunes App Store and Google Play. You can download the app to your mobile device to read the article offline and create a self-guided walking tour to visit the attractions featured in this article. The app turns your mobile device into a personal tour guide and it works offline, so no data plan is needed when traveling abroad.