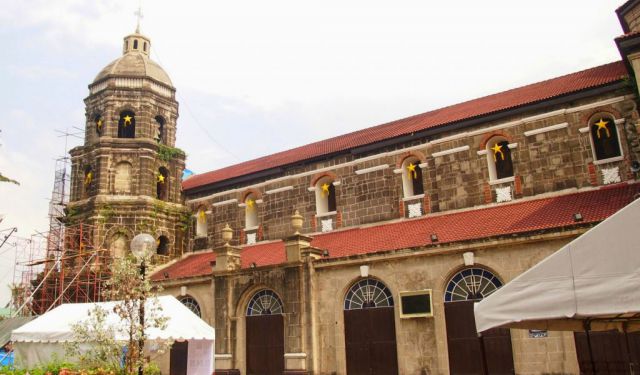 "But there's nothing to see in Santa Ana." My sister and husband's voices rang inside my head as I stepped out of the cab to the bustling pavement.

On the outside, Sta. Ana looks pretty much like the rest of Manila: chaotic, trafficked and perennially populated. Save for Sta. Ana church and the to-die-for P35 pancit palabok at the public market, to me, there wasn't anything else impressionable about this district.

It was that curiosity that led me back there, along with travel bloggers Kim and Sol, one rainy December morning upon the invitation of the town's residents.

And while home-grown guides Ernesto Panis and Boyet Magala - members of the non-profit Santa Ana Heritage Tourism Association (SAHTA), a congregation of town residents involved in the promotion of the heritage and culture of Santa Ana, along with Fundacion Santiago - are masterful storytellers, treading the age-old halls of Santa Ana Church, I felt that the district's colorful stories are best told by the structures themselves. ...... (follow the instructions below for accessing the rest of this article).
This article is featured in the app "GPSmyCity: Walks in 1K+ Cities" on iTunes App Store and Google Play. You can download the app to your mobile device to read the article offline and create a self-guided walking tour to visit the attractions featured in this article. The app turns your mobile device into a personal tour guide and it works offline, so no data plan is needed when traveling abroad.