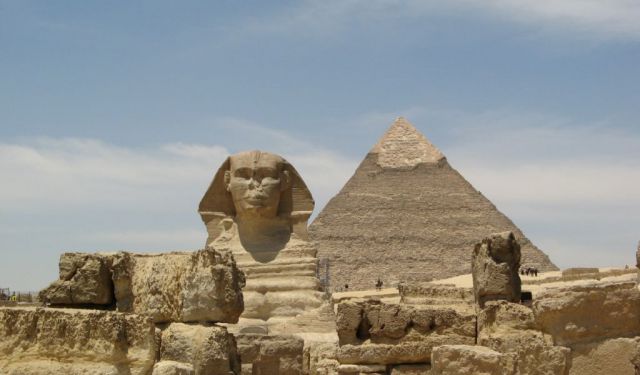 What to Know Before You Visit the Pyramids of Giza, Giza, Egypt (B)

The Pyramids of Giza are some of the most iconic and fascinating man-made architectural achievements in the world. They are also overrun with tourists, fake security guards, aggressive camel drivers, and vendors selling cheap and chintzy souvenirs.

But don’t let those drawbacks stop you from seeing these engineering marvels. They’re worth visiting, even if the environment isn’t the most ideal. I have a few tips that may help enhance your experience.

Giza is actually a suburb of Cairo, and the third-largest city in Egypt. The Giza pyramid complex consists of several monuments, including three primary pyramids and a handful of satellite or subsidiary pyramids, temples, and of course, the Great Sphinx. There’s also the worker’s village and industrial complex, as well as cemeteries for the workers who built these massive structures.

The pyramids were purpose-built as the final resting places for Egyptian pharaohs. The pyramids at Giza were built sometime in the 26th Century BC for Khufu, Khafre, and Menkaure, ancient rulers of Egypt. (Although they may be much older than that, according to some recent research!) Contrary to popular belief, slaves did not build the pyramids – they were built by thousands of paid labourers. ...... (follow the instructions below for accessing the rest of this article).
This article is featured in the app "GPSmyCity: Walks in 1K+ Cities" on iTunes App Store and Google Play. You can download the app to your mobile device to read the article offline and create a self-guided walking tour to visit the attractions featured in this article. The app turns your mobile device into a personal tour guide and it works offline, so no data plan is needed when traveling abroad.

Create Your Own Self-Guided Walks in Giza
Guide Name: What to Know Before You Visit the Pyramids of Giza
Guide Location: Egypt » Giza
Guide Type: Self-guided Walking Tour (Article (B))
Author: Darlene Fisher
Read it on Author's Website: http://thirstyjourneys.com/what-to-know-before-visiting-giza-pyramids/
Sight(s) Featured in This Guide: