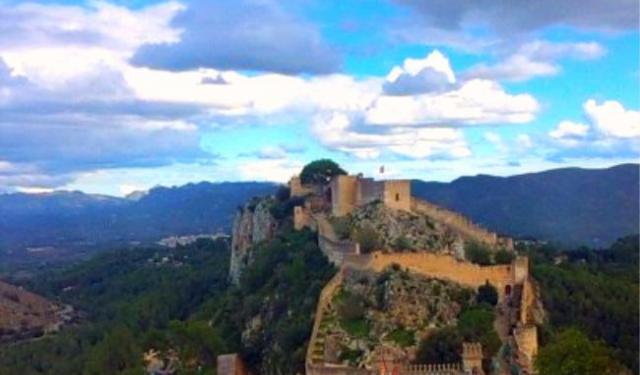 Xativa-Is it a Must-do Day Trip From Valencia?, Xativa, Spain (B)

Xativa. It’s certainly a memorable day trip from Valencia. However, not going on a strike day would have been even better.

The train journey, once it eventually got under way, was interesting. Beyond the industrial suburbs of Valencia, we crossed a gentle landscape of citrus trees. Further from the city, the red roof tiles and church steeples of successive towns had a touch of rural France rather than Spain.

At first sight, the town was unremarkable. Its main square could have been anywhere Spain. Nevertheless, there were plenty of fast food joints for hungry travellers and the 100 Montaditos outlet was good value. A few euro covered a salad, a drink and a plato that could include French fries or Spanish omelette. It may not be the best of local cuisine, but it’s surely the castle that draws visitors to Xativa, not the food.

Perched strategically along the brow of a tall hill, just getting up there required a steep climb. My reward was a cup of coffee at a terrace café. Let’s call it a coffee with a view. A plain of fertile fields stretched between the mountains. At either side, jagged peaks rose up suddenly. Seeming to form a system of defence, rough fortress buildings dominated most of the neighbouring high points. ...... (follow the instructions below for accessing the rest of this article).
This article is featured in the app "GPSmyCity: Walks in 1K+ Cities" on iTunes App Store and Google Play. You can download the app to your mobile device to read the article offline and create a self-guided walking tour to visit the attractions featured in this article. The app turns your mobile device into a personal tour guide and it works offline, so no data plan is needed when traveling abroad.