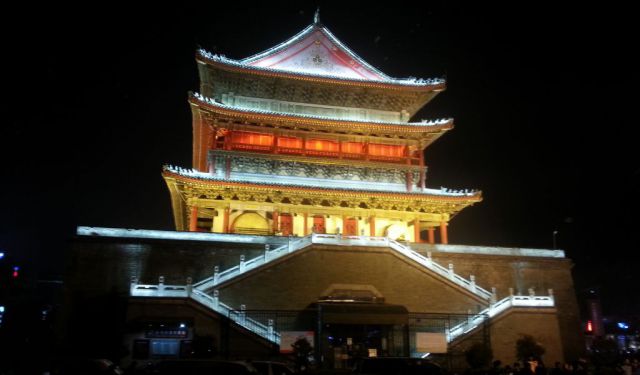 Xian – More than Just the Terracotta Warriors, Xian, China (B)

In March we spent a long weekend in the city of Xi’an, in the Shaanxi province of China. We really only went there because we wanted to see the Terracotta Warriors, but we both really enjoyed our time in Xi’an – it’s a very nice city.

We stayed in Citadines Central Xi’an, which calls itself an apart-hotel. I don’t know if all the rooms were apartments, or just the larger ones, but ours was the biggest they had and it was very spacious indeed! Two very large bedrooms, both en suite, with an equally large open-plan lounge-kitchen. It was all newly decorated and very well equipped. The breakfast, which was included in the price, was mostly Chinese with a few western-style options. Not the best hotel breakfast I’ve ever had, but adequate to fill you up at the beginning of the day.

The hotel was really well positioned, just a few minutes walk south of the Drum tower. There were a few small 7-11 type convenience stores nearby which were useful for buying milk and snacks for the twins. If you wanted to go shopping, there were plenty of shopping malls nearby too, although we didn’t go in any! ...... (follow the instructions below for accessing the rest of this article).
This article is featured in the app "GPSmyCity: Walks in 1K+ Cities" on iTunes App Store and Google Play. You can download the app to your mobile device to read the article offline and create a self-guided walking tour to visit the attractions featured in this article. The app turns your mobile device into a personal tour guide and it works offline, so no data plan is needed when traveling abroad.