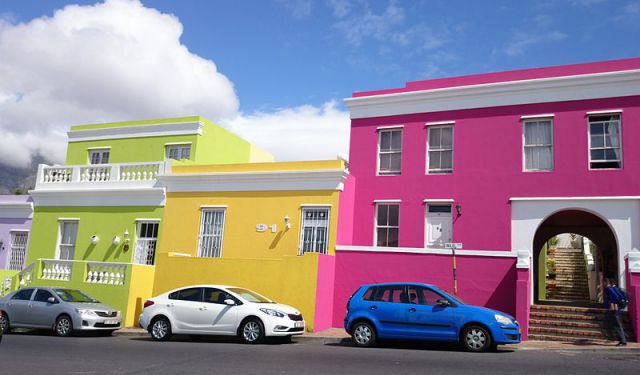 Image by Nkansahrexford on Wikimedia under Creative Commons License.

While you are in Cape Town don’t miss a visit to Bo-Kaap, formerly called the Malay Quarter, a gem of an area nestled on Signal Hill. You will find here cobble stoned streets lined with graceful, brightly painted 18th century Dutch Cape and English style houses, most of which have flat roofs. This area was where the Muslim community settled when they were brought to South Africa by the Dutch East India Company and the oldest mosque in the city was built here built in the late 19th century. Freed slaves also lived in this district and they painted the houses in pastel colors in defiance of the racial segregation laws under which they were forbidden to wear colorful clothing in public.

To learn more about this fascinating neighborhood check out the Bo-Kaap Museum which is housed in the oldest building in the area, built in 1760. One of the interesting features of this house is the Voorstoep – a front terrace with a bench at each end. The museum exhibits many artifacts brought here by the Muslim craftsmen and part of it represents local family life in the 19th century. While you are exploring this lively, colorful township, do stay on for a meal in one of the traditional restaurants and discover delicious, spicy Cape Malay food.
How it works: A discovery walk features a route using which you can explore a popular city neighborhood on your own. This walk, along with other self-guided walks in over 1,000 cities, can be found on the app "GPSmyCity: Walks in 1K+ Cities" which can be downloaded from iTunes App Store or Google Play to your mobile phone or tablet. The app's built-in GPS navigation functions allow following this walk route with ease. The app works both online and offline, so no data plan is needed when traveling abroad.

When Jan van Riebeeck came to Cape Town in 1652, his mission was to establish a supply station here for the ships of the Dutch East India Company sailing to East Africa, India, and the Far East. The oldest buildings standing in Cape Town today were built in the second half of 17th century.

Garden House was originally a shabby tool shed owned by the Dutch East India Company. But when a new...  view more

Cape Town is grand with quality shopping opportunities. Greenmarket Square, once the heart of the of Cape Town's business district, started off as a a slave market, then a cattle market. Today it houses South Africa's best flea market where one can find tribal costumes to precious jewelry and more.

Pan African Market is another place to shop for African goods from over a dozen...  view more