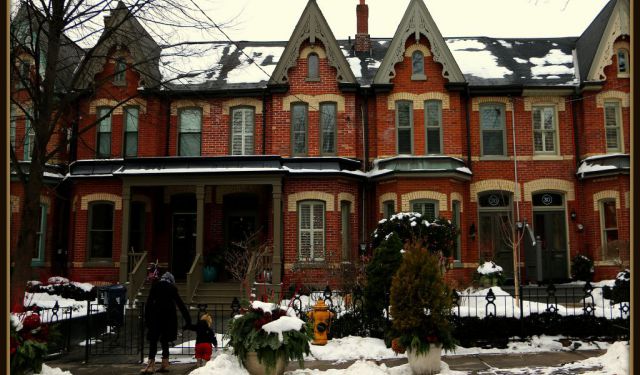 Image by Rina Pitucci on Flickr under Creative Commons License.

Toronto is a beautiful city with a fabulous mix of both modern and heritage architecture. Cabbagetown is located on the eastern side of downtown and it is a stunning neighborhood, one of the oldest in the city. It is a colorful enclave of lovingly restored Victorian homes, small workers’ cottages, a lively street scene, bars, restaurants and cafés. Once a poor neighborhood, Cabbagetown is now a highly sought after area for its beautiful properties and easygoing ambience. Gentrification began in the 1970s and the efforts and dedication of homeowners and investors has resulted in Cabbagetown being designated a Heritage Conservation District. It is also known as the largest area of preserved Victorian homes in North America.

As you tour the area, study the architectural styles and admire the majestic Victorian façades. Prepare to be stunned when you visit the Necropolis Chapel, a Gothic Revival style church that dates back to 1872. Its large cemetery is known as the City of Dead and it is the final resting place of some of Toronto's most important former citizens, including the first mayor.

During your time in the city's downtown core, be sure to drop in on the Allan Gardens Conservatory. Tropical plants from all over the world are showcased in its greenhouses, which includes the Palm House. This standout structure in cast-iron and glass was built in 1910. While Cabbagetown glorifies its past, it also looks to the future with the development of some beautiful contemporary condos and modern residential buildings.
How it works: A discovery walk features a route using which you can explore a popular city neighborhood on your own. This walk, along with other self-guided walks in over 1,000 cities, can be found on the app "GPSmyCity: Walks in 1K+ Cities" which can be downloaded from iTunes App Store or Google Play to your mobile phone or tablet. The app's built-in GPS navigation functions allow following this walk route with ease. The app works both online and offline, so no data plan is needed when traveling abroad.