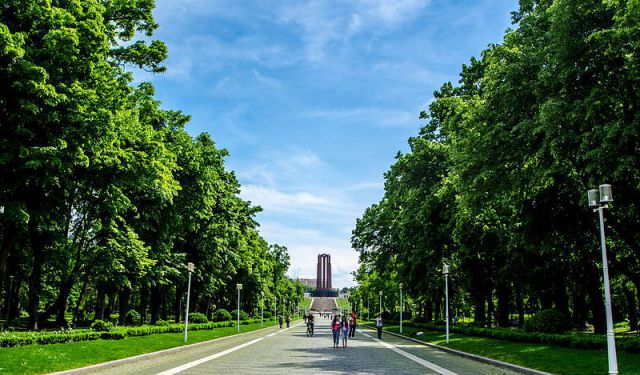 Image by Daria Virbanescu on Wikimedia under Creative Commons License.

Carol Park is a wonderful urban escape, a place to relax among gorgeous vegetation such as Sequoia Gigantea and where you can see historic monuments and buildings. The first glimpses of historic structures come in the area around the park, where there are houses that are more than 100 years old and Filaret Bus Station. This was the city's first train station, which has now been converted into the bus station. Some of the architectural design styles you will see in the locale are Neo-Classical with a French influence and Neo-Romanian.

On your way into Carol Park, you will pass by Zodiac Fountain, a large water feature built in 1935 with the zodiac signs completed in mosaics. See the medieval-looking Tepes Castle, which was once a water tower and stop by the red and black granite Memorial of the People’s Heroes. Photograph the park's beautiful statues, including the two Giants' Statues which depict two naked youths and the figure of Beauty, a young girl sleeping.

Other highlights of the Carol Park area that are not to be missed are Cutitul de Argint Church and its beautiful frescoes, and Xenofon Street. This is the only street in the city with stairs, painted steps that lead to the highest point in Bucharest.
How it works: A discovery walk features a route using which you can explore a popular city neighborhood on your own. This walk, along with other self-guided walks in over 1,000 cities, can be found on the app "GPSmyCity: Walks in 1K+ Cities" which can be downloaded from iTunes App Store or Google Play to your mobile phone or tablet. The app's built-in GPS navigation functions allow following this walk route with ease. The app works both online and offline, so no data plan is needed when traveling abroad.