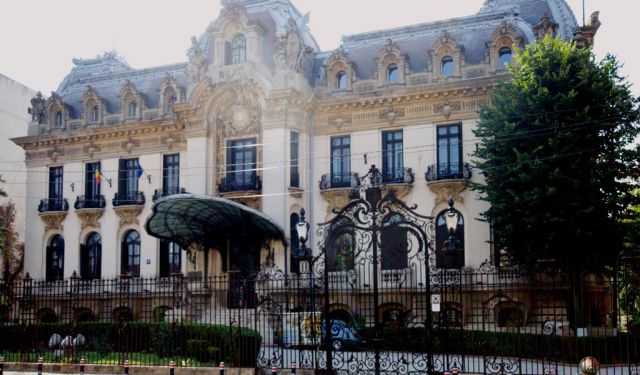 Image by Sabin Iacob on Flickr under Creative Commons License.

Bucharest has beautiful architecture throughout the city, showcasing the finest styles from numerous eras and centuries. Calea Victoriei (Victory Road) basks in the reputation of being one of the city's most charming streets. Between the two world wars it was considered a highly fashionable street and was a much sought after place to live.

Its glories live on in some of the outstanding structures. Among them is Cantacuzino Palace, an opulent building that was constructed at the beginning of the 20th century for a former prime minister. Today it houses the Memorial House and a museum dedicated to the life and work of George Enescu. The Romanian composer, who died in 1955 was one of the greatest composers of the last century.

There are many other architectural highlights to savor on your tour of the area. On Victory Square is the stark and austere Neoclassical Victoria Palace, built in 1937 as the headquarters of the Prime Minister of Romania and his cabinet. Venture inside the Museum of the Romanian Peasant, a red brick Neo-Romanian style building. Inside are more than 90,000 folk art artifacts that trace the cultural life of Romanian people.

In the National Geological Museum, study the exquisite collection of minerals and quartz from the region. When it's time to take a break from your excursions, chill out in Nicolae Iorga Park. Within the grounds are busts to historian and politician Nicolae Iorga and poet Nichita Stanescu.
How it works: A discovery walk features a route using which you can explore a popular city neighborhood on your own. This walk, along with other self-guided walks in over 1,000 cities, can be found on the app "GPSmyCity: Walks in 1K+ Cities" which can be downloaded from iTunes App Store or Google Play to your mobile phone or tablet. The app's built-in GPS navigation functions allow following this walk route with ease. The app works both online and offline, so no data plan is needed when traveling abroad.