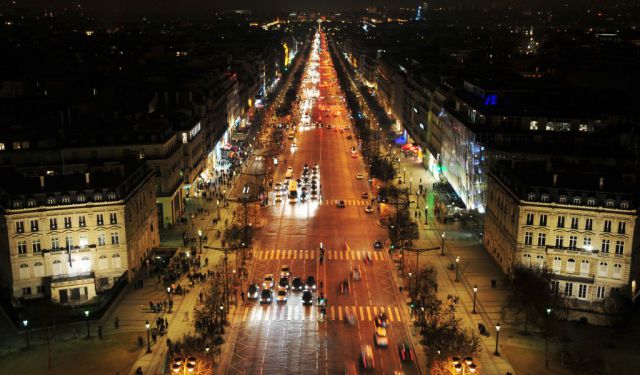 Image by m-louis .® on Flickr under Creative Commons License.

The Champs-Elysées is one of the world's most famous avenues, a huge tree-lined boulevard with some of the best shopping and dining in the city as well as beautiful architecture. First to the shops, and here you will be able to purchase clothes from many of the world's leading designers.

The place to go for haute couture is the triangle d'or, the area around Avenue Montaigne, Ave George V, and Rue Francois 1er. Don’t just confine your shopping trip to the main strip, because there are many fine boutiques in the streets around the Champs-Elysées. Take some time to appreciate the area’s architectural gems. Crowning the western end of the boulevard is the Arc de Triomphe, which honors those who fought for France in the French Revolutionary and Napoleonic Wars. Engraved on its stonework are the names of famous generals. Among the other architectural highlights are the Place de la Concorde, a magnificent public square with statues and fountains and surrounded by grand buildings.

Come back to the Champs-Elysées at night to dine in some of the best restaurants in Paris. Then catch a cabaret show at such lively entertainment venues as the Lido and Crazy Horse. As you make your way back to your hotel, stop to throw admiring glances at the Arc de Triomphe, brilliantly illuminated against the night sky.
How it works: A discovery walk features a route using which you can explore a popular city neighborhood on your own. This walk, along with other self-guided walks in over 1,000 cities, can be found on the app "GPSmyCity: Walks in 1K+ Cities" which can be downloaded from iTunes App Store or Google Play to your mobile phone or tablet. The app's built-in GPS navigation functions allow following this walk route with ease. The app works both online and offline, so no data plan is needed when traveling abroad.

Image by Son of Groucho under Creative Commons License.