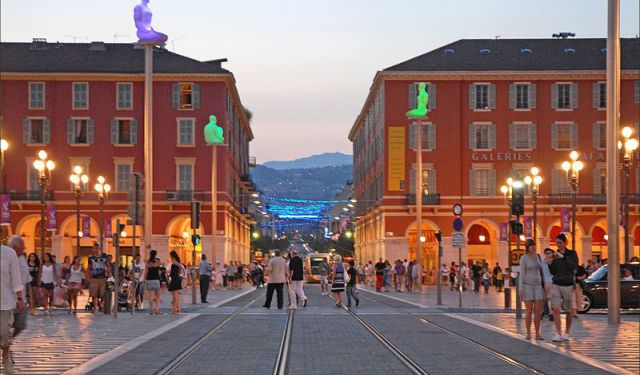 Image by dalbera on Wikimedia under Creative Commons License.

For an authentic slice of French living, spend a little time in Central Nice, a charming neighborhood of typical Nicois-style buildings where there is a profusion of shops, restaurants, cafés and boutiques. Everything you need is within a few minutes easy walking distance.

The area is also much cheaper than many other parts of the city, such as the Musicians Quarter, and is very popular with local French buyers as well as expatriates from several nations. After a short visit to the locale, you will see why residents love it so much. Stroll along pleasant roads admiring the elegance of the buildings while savoring the tranquility. The architecture primarily dates from the late 19th century to the early 20th century, solid stone structures with ample balconies and green window shutters. Many of the streets have their own individual characters.

Go over to Carre d'Or which has an abundance of luxury boutiques, bars and restaurants. Browse the book shops and art stores of rue Hotel des Postres. Visit the small boutiques on rue Gioffredo and then relax in one of its delightful cafés. The neighborhood's rue Pastorelli is one of the more commercial and hence busiest streets. It also features some of the newer properties in the central part of the city.
How it works: A discovery walk features a route using which you can explore a popular city neighborhood on your own. This walk, along with other self-guided walks in over 1,000 cities, can be found on the app "GPSmyCity: Walks in 1K+ Cities" which can be downloaded from iTunes App Store or Google Play to your mobile phone or tablet. The app's built-in GPS navigation functions allow following this walk route with ease. The app works both online and offline, so no data plan is needed when traveling abroad.