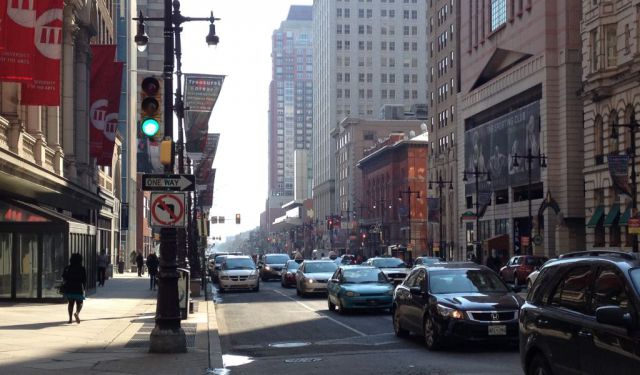 Image by fdocbc on Flickr under Creative Commons License.

Walnut Street’s reputation is well known, being characterized as Philadelphia’s premier shopping district. Fill your bags with exciting fashion purchases from designer and fashion stores. With over 200 shops, Walnut Street is a paradise for shoppers.

Here you will find high-end designers and such big retail names as GUESS, H&M, Gap, Anthropologie and Banana Republic. The street tends to attract big spenders with deep pockets and even made it onto Women's Wear Daily Magazine's list of most expensive shopping districts in America.

In addition to the stores and independent boutiques selling designer clothes, you will find numerous bars and gourmet eateries. This area is also known as Rittenhouse Row, just like Michigan Avenue is referred to as the Magnificent Mile. For some relaxation between bouts of shopping, go to Rittenhouse Square, the city park in the center of the district. This is a lovely leafy, green spot. Watch the world go by from your perch on a bench then inspect the statues that are dotted around the park.

Once you are feeling reenergized, continue on to Chestnut Street for more shopping. Among the retail offerings here are The Shops at Liberty Place, a mall housing J.Crew, Nine West, Godiva Chocolates and many others.
How it works: A discovery walk features a route using which you can explore a popular city neighborhood on your own. This walk, along with other self-guided walks in over 1,000 cities, can be found on the app "GPSmyCity: Walks in 1K+ Cities" which can be downloaded from iTunes App Store or Google Play to your mobile phone or tablet. The app's built-in GPS navigation functions allow following this walk route with ease. The app works both online and offline, so no data plan is needed when traveling abroad.