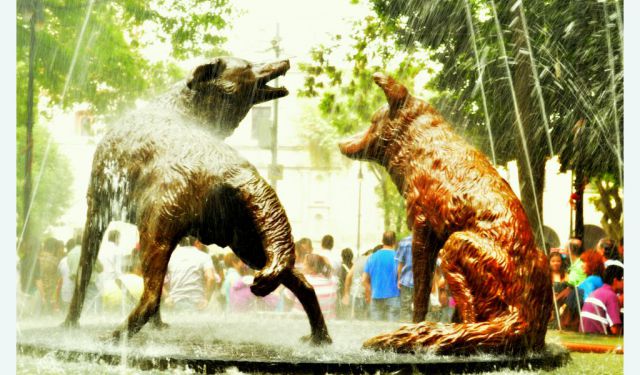 Coyoacán charms with its narrow colonial-era streets, graceful plazas and shops. The name translates as "place of coyotes" and its genteel vibe has attracted such current residents as the Colombian novelist Gabriel Garcia Marquez. Among the neighborhood's former locals was the Marxist revolutionary Leon Trotsky.

Enjoy some peaceful moments in one of the focal points of the locale, the Jardin Centenario. This central plaza features the famous "Coyotes Fountain" depicting drinking coyotes. At the entrance to the plaza is a double archway that dates back to the 16th century. Adjacent is Plaza Hidalgo, the neighborhood’s main gathering place. Take in some of Coyoacán's historical buildings during your time here. Visit the Temple and Ex Convent de San Juan Bautista, a grand 16th-century Baroque church filled with many religious artworks.

Stroll down Francisco Sosa Street, one of the oldest streets in the city. Admire the elegant 18th-century colonial houses. If you are in the mood for some shopping, browse more than 450 stalls at Coyoacán Market, for fresh produce, flowers, costumes, wicker baskets and much more. The market also has a number of fast food venues in its arcades. Try some of the local delicacies, such as chapulines (spicy dried grasshoppers).
How it works: A discovery walk features a route using which you can explore a popular city neighborhood on your own. This walk, along with other self-guided walks in over 1,000 cities, can be found on the app "GPSmyCity: Walks in 1K+ Cities" which can be downloaded from iTunes App Store or Google Play to your mobile phone or tablet. The app's built-in GPS navigation functions allow following this walk route with ease. The app works both online and offline, so no data plan is needed when traveling abroad.