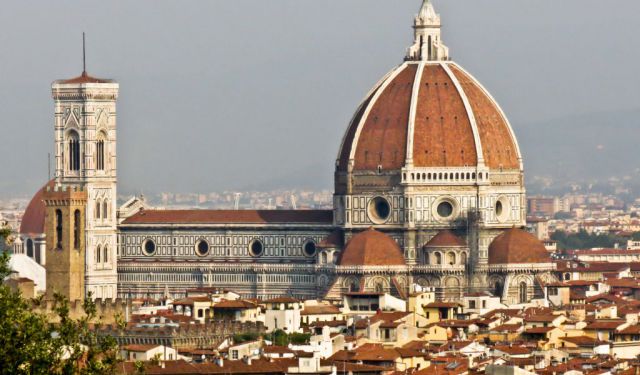 Image by Mark Smith on Flickr under Creative Commons License.

Florence is an outrageously gorgeous city that for centuries has captured the hearts of poets, writers, artists and all who have visited. In large part, this is due to the astonishing architecture, the work of master designers, builders and craftsmen. Many of the city's most famous landmarks are to be found in the Duomo area, one of the oldest parts of the city. A neat fact about Florence is that it follows the grid pattern laid down when it was a Roman colony.

The most prominent landmark is the breathtaking sight that is the cathedral, also known as the Duomo. This vast Gothic structure is one of the largest cathedrals in Italy. It was built on the site of a 7th-century church and the magnificent Renaissance dome was designed by Filippo Brunelleschi, a prominent architect and engineer of the Italian Renaissance.

Nearby is the Uffizi Gallery and the Accademia with Michelangelo’s David. Stroll the historic streets browsing the high-end stores for designer fashions. Among the big name brands you will find here are Prada, Gucci and Cavalli. Then relax in beautiful piazzas. At night, go to one Florence's most famous meeting points, the Piazza della Repubblica. Order a drink from one of the bars or cafés and sit on an outdoor terrace watching locals and visitors pass by.
How it works: A discovery walk features a route using which you can explore a popular city neighborhood on your own. This walk, along with other self-guided walks in over 1,000 cities, can be found on the app "GPSmyCity: Walks in 1K+ Cities" which can be downloaded from iTunes App Store or Google Play to your mobile phone or tablet. The app's built-in GPS navigation functions allow following this walk route with ease. The app works both online and offline, so no data plan is needed when traveling abroad.