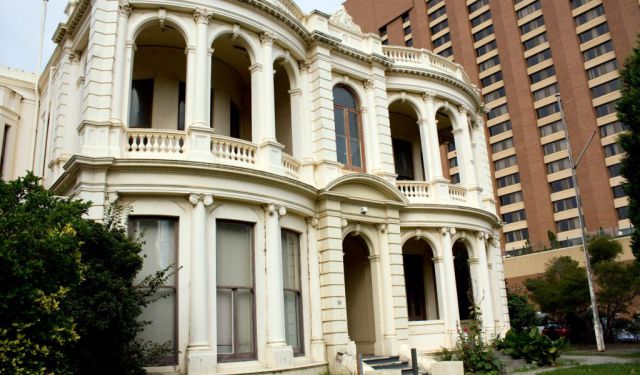 Image by Rexness on Flickr under Creative Commons License.

East Melbourne is an enchanting city suburb with attractive Victorian-era homes and gardens. Appreciate the fabulous architecture of a fascinating age when you visit Queen Bess Row, a heritage building that looks like a mansion, but is actually three houses. Admire the red brick walls, arcaded windows and prominent chimneys of this Queen Anne Revival building, the first fully developed example of this style in the city.

Soak up pastoral delights with a visit to some of the area's Victorian-era gardens. One of the most impressive is Fitzroy Garden, a Melbourne icon where paths are lined by magnificent elm trees. Within the grounds is Cooks' Cottage. Built in 1755, this is the oldest building in Australia and it was owned by the parents of Captain James Cook, the famous 19th-century British explorer and navigator. Take a self-guided tour of the cottage and see antiques and volunteers dressed in period costumes.

On the corner of Hotham and Powlett streets is another slice of history, the Cairns Memorial Presbyterian Church. The original structure dates back to the late 19th century, but it was burnt down in 1988, leaving only a sandstone shell, which has been augmented with a glass extension.
How it works: A discovery walk features a route using which you can explore a popular city neighborhood on your own. This walk, along with other self-guided walks in over 1,000 cities, can be found on the app "GPSmyCity: Walks in 1K+ Cities" which can be downloaded from iTunes App Store or Google Play to your mobile phone or tablet. The app's built-in GPS navigation functions allow following this walk route with ease. The app works both online and offline, so no data plan is needed when traveling abroad.