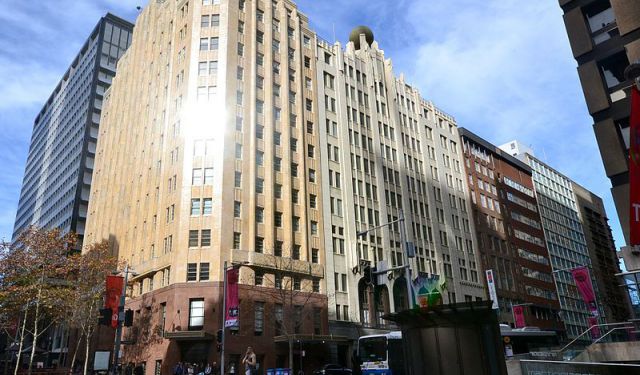 Image by Sardaka on Wikimedia under Creative Commons License.

Monuments, parks, historical buildings and gorgeous architecture are the dazzling highlights of Elizabeth Street, one of Sydney’s longest inner city streets. It is the location of such important sites as the Oddfellows War Memorial, a pink granite fountain and sandstone monolith erected in memory of members of the Oddfellows Society who enlisted in World War I.

You will find it at Hyde Park, which is the oldest park in Australia. The 40-acre (16.2-hectare) site dates back to the beginning of the 19th century and was named after Hyde Park in London. While you are here, stop by the beautiful Archibald Fountain.

Another important war memorial is the Cenotaph, which is over on Martin Place. Among the street’s architectural highlights is Australian Hall, an early 20th-century building in Federation Romanesque style. It was the location of the first national Aboriginal civil rights gathering, in 1938. Admire the grand façade and architecture of the heritage-listed Great Synagogue which combines Byzantine and gothic elements.

Other area attractions worthy of note are the Obelisk, a tall structure based on Cleopatra's Needle in London and Waterloo Park. Within the grounds of this green escape is Our Lady of Mount Carmel Church, built in 1859.
How it works: A discovery walk features a route using which you can explore a popular city neighborhood on your own. This walk, along with other self-guided walks in over 1,000 cities, can be found on the app "GPSmyCity: Walks in 1K+ Cities" which can be downloaded from iTunes App Store or Google Play to your mobile phone or tablet. The app's built-in GPS navigation functions allow following this walk route with ease. The app works both online and offline, so no data plan is needed when traveling abroad.