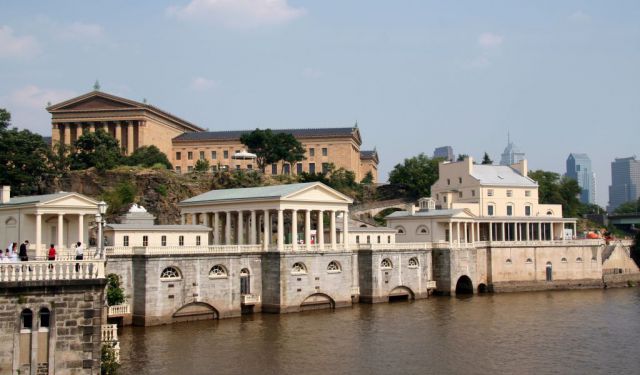 Image by Mark Skrobola on Flickr under Creative Commons License.

Unwind in a piece of pastoral heaven, a vast parkland expanse that boasts natural and cultural attractions. Fairmount Park covers an area of more than 9,200 acres (3,723 hectares), featuring verdant green-covered hills, shaded woodlands, miles of trails and a tranquil waterfront.

Go for long leisurely strolls along the extensive network of trails or get on your bike and ride if you prefer. You can even go horse riding along the routes. Bring your bikes with you to cycle the Schuylkill River Trail, most of which is on an old railway line that is well-maintained. The trail is flat for the most part and suitable for the entire family.

Then roll out the picnic blanket for an alfresco feast and admire the row of Victorian-era boathouses, which have become architectural landmarks. Boating clubs have decorated the outlines of these buildings with lights, which make a fascinating spectacle at night.

While you are in this great green escape, visit Philadelphia's own Parthenon, the Philadelphia Museum of Arts. It is the third largest art museum in the country and houses a rich collection of more than 200,000 objects. They include world-class holdings of European and American paintings, drawings and decorative arts among many other pieces.
How it works: A discovery walk features a route using which you can explore a popular city neighborhood on your own. This walk, along with other self-guided walks in over 1,000 cities, can be found on the app "GPSmyCity: Walks in 1K+ Cities" which can be downloaded from iTunes App Store or Google Play to your mobile phone or tablet. The app's built-in GPS navigation functions allow following this walk route with ease. The app works both online and offline, so no data plan is needed when traveling abroad.

Image by Jim, the Photographer under Creative Commons License.

Image by b k under Creative Commons License.