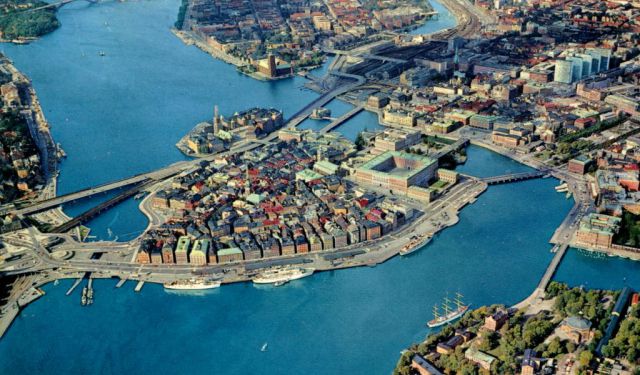 Image by Roger Wollstadt on Flickr under Creative Commons License.

Go on a mesmerizing journey back in time when you visit Gamla Stan, Stockholm's Old Town. The beautiful district dates back to the 13th century and is one of the most significant historic parts of town. Amble along cobblestone streets and alleys and look at the well-preserved 17th-century homes. Visit the tourist shops, dine in a pub or restaurant and soak up the glorious harbor views.

However, you haven't really explored the Old Town until you have looked at some of the landmark buildings. Stop by the Royal Palace, a huge 18th-century building with more than 600 rooms. This is the official residence and major royal palace of the Swedish monarch and it also houses a number of museums. Among them are Gustav III’s Museum of Antiquities and the Treasury. The Armory is also here, which contains royal costumes and armor. Be sure to watch the daily changing of the guard ceremony while you are here.

Next, appreciate the beauty of Bonde Palace, a 17th-century building that is the current seat of the Supreme Court of Sweden. Nearby is the House of Knights, considered by some to be the most beautiful house in Stockholm. Another highlight of the area is Mårten Trotzigs Grand, the narrowest alley in the city, just 90 centimeters across at its narrowest point.
How it works: A discovery walk features a route using which you can explore a popular city neighborhood on your own. This walk, along with other self-guided walks in over 1,000 cities, can be found on the app "GPSmyCity: Walks in 1K+ Cities" which can be downloaded from iTunes App Store or Google Play to your mobile phone or tablet. The app's built-in GPS navigation functions allow following this walk route with ease. The app works both online and offline, so no data plan is needed when traveling abroad.