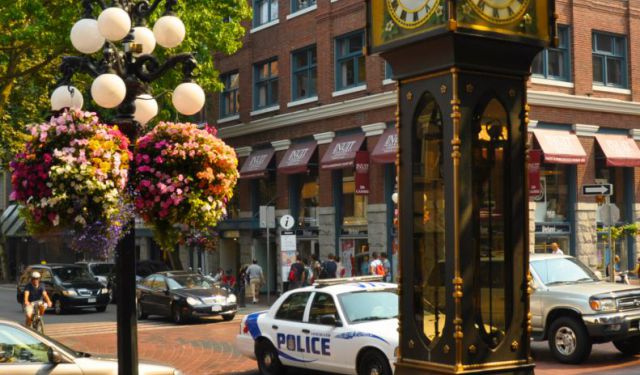 Image by Stuart Madden on Flickr under Creative Commons License.

To get the feel of authentic Vancouver, head for the Gastown district. This is where the city was born: an ex-sailor turned gold prospector built an inn here in the late 19th century and a small settlement, mostly of mill workers, dockhands and merchants, sprang up around it. You can see a statue of “Gassy” Jack in Maple Street Square. Many of the streets in Gastown are still cobblestoned and you will find lovely examples of Victorian buildings that have been converted from houses to gift shops, galleries and up-market stores.

The area also attracts artists, so you will also find plenty of studios and even drama schools. The students hang out in the neighborhood’s many cafes and you’ll often hear a group of them declaiming lines from a Shakespearean play while you are enjoying a light snack!

Visit the early 20th century Canadian Pacific Railway Station, whose elegant façade hides modern railroad facilities, including a sea-bus and a helipad. Don’t be fooled by the famous steam-powered clock on the corner of Cambie Street: it’s one of Vancouver’s most photographed monuments, but it is only about 35 years old. Built in the late 70’s, it covers a steam grate and instead of chiming – it whistles on the hour!
How it works: A discovery walk features a route using which you can explore a popular city neighborhood on your own. This walk, along with other self-guided walks in over 1,000 cities, can be found on the app "GPSmyCity: Walks in 1K+ Cities" which can be downloaded from iTunes App Store or Google Play to your mobile phone or tablet. The app's built-in GPS navigation functions allow following this walk route with ease. The app works both online and offline, so no data plan is needed when traveling abroad.