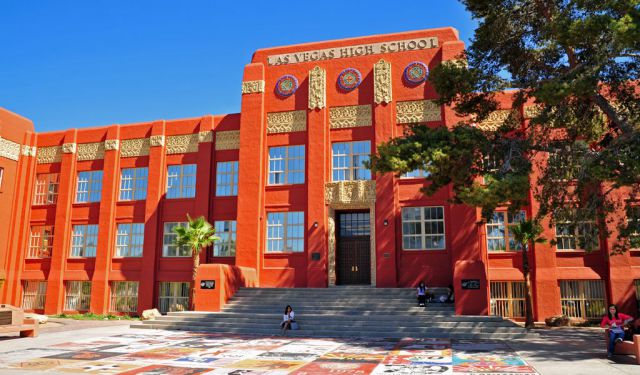 Image by Andrew on Flickr under Creative Commons License.

While exploring Downtown Las Vegas you will eventually find yourself in the High School Historic District which boasts some of the oldest buildings in the city, built between the late 1920’s and the late 1930’s. Most of them are to be found in the locally named “Lawyer’s Row” and were once the most coveted residences in the valley before being turned into law offices.

The High School is now an academy for performing arts, but when it was built, it was the first school in Las Vegas. At that time it was to be found in the suburbs, but as the city spread it became part of the Downtown area. The Academy was built in 1930 and the buildings are fine examples of Art Deco architecture. Since the early 1990’s the buildings have been added to the National Register of Historic Places.

Not far from here the Downtown area is popular with street artists and you will find some of the city’s best examples of large-scale graffiti created by well-known street artists. There are around eight huge murals depicting animals, portraits and abstracts. While in some districts of Las Vegas, the city council wages a never ending war against graffiti, these murals have become part of the scenery and are truly magnificent.
How it works: A discovery walk features a route using which you can explore a popular city neighborhood on your own. This walk, along with other self-guided walks in over 1,000 cities, can be found on the app "GPSmyCity: Walks in 1K+ Cities" which can be downloaded from iTunes App Store or Google Play to your mobile phone or tablet. The app's built-in GPS navigation functions allow following this walk route with ease. The app works both online and offline, so no data plan is needed when traveling abroad.

1) Las Vegas Academy of the Arts

Built amid Nevada’s Mojave Desert, Las Vegas is an iconic destination renowned for its round-the-clock casinos and numerous entertainment options. Las Vegas Strip is one of the greatest entertainment places in the world, as well as the densest collection of neon lights. A walk down the Strip is an all-inclusive Las Vegas experience - an adventure that comprises 75 years of history, glamour and...  view more