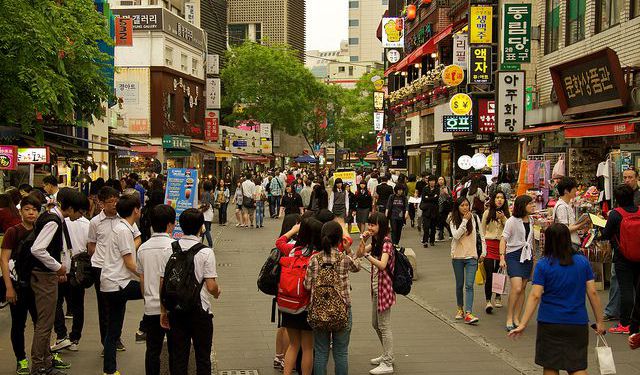 The abundance of wooden tea houses (nearly 40), boutique galleries and street vendors offering traditional Korean snacks makes Insa-dong street in Seoul a true magnet for visitors of the Korean capital. Alongside the free entertainment the area is famous for, Insa-dong is also one of the key destinations in the city for buying traditional Korean art, products and souvenirs, such as hanbok (traditional clothing), hanji (traditional paper), traditional teas, pottery, and folk crafts.

There is a plethora of antique shops (more than 50), art galleries (80+), traditional stationery shops, handicraft shops, pottery and porcelain shops, bookstores, and art supply stores. On top of that, there are almost 100 restaurants specialized in traditional Korean cuisine. With such a variety on offer, one is really bound to be spoilt for choice here.

On Sundays the street turns pedestrian-only and is flooded with street performers, buskers and the lively crowds of young and old rushing to enjoy one of Seoul’s most exiting and creative neighborhoods.The tastefully decorated traditional teashops invite passers-by to relax in a calm zen-like atmosphere. For those interested in Korean traditional culture and crafts, Insa-dong is undoubtedly a must-see attraction which will leave imprint of Seoul in one's memory for the years to come.
How it works: A discovery walk features a route using which you can explore a popular city neighborhood on your own. This walk, along with other self-guided walks in over 1,000 cities, can be found on the app "GPSmyCity: Walks in 1K+ Cities" which can be downloaded from iTunes App Store or Google Play to your mobile phone or tablet. The app's built-in GPS navigation functions allow following this walk route with ease. The app works both online and offline, so no data plan is needed when traveling abroad.