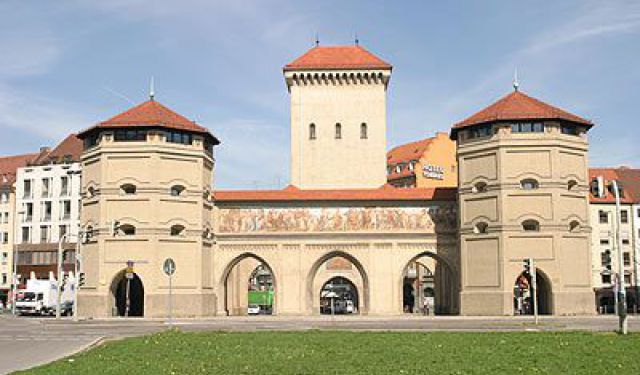 Image by Stefan Beck on Wikimedia under Creative Commons License.

Take your time looking over some of the beautiful architectural forms that you will come across when you visit the Altstadt-Lehel district. Marvel at the Isartor, one of the four main gates of the old medieval city wall. The Gothic construction was built in the 14th century and was once a key part of the city’s defenses. Today, it houses a museum to a Bavarian comedian and performer and a café.

Then go to the palatial Maximilianeum, home of the Bavarian state parliament. The grand building originally served as a base for a foundation for gifted students. Look over the wondrous façade, which is decorated with mosaics, columns, arches and niches filled with busts.

There's more beautiful architecture on display at Saint Lukas Church, a late 19th-century domed building in Romanesque style. This is the third Lutheran church in Munich and the only almost completely persevered Protestant parish church in the city. Inside, are numerous Gothic-style features and stunning stained glass windows.

Another fascinating highlight of a visit to Altstadt-Lehel is the Maxmonument, also known as the Max II Memorial. This large tribute honors Maximilian II who was king of Bavaria from 1848 until 1864.
How it works: A discovery walk features a route using which you can explore a popular city neighborhood on your own. This walk, along with other self-guided walks in over 1,000 cities, can be found on the app "GPSmyCity: Walks in 1K+ Cities" which can be downloaded from iTunes App Store or Google Play to your mobile phone or tablet. The app's built-in GPS navigation functions allow following this walk route with ease. The app works both online and offline, so no data plan is needed when traveling abroad.