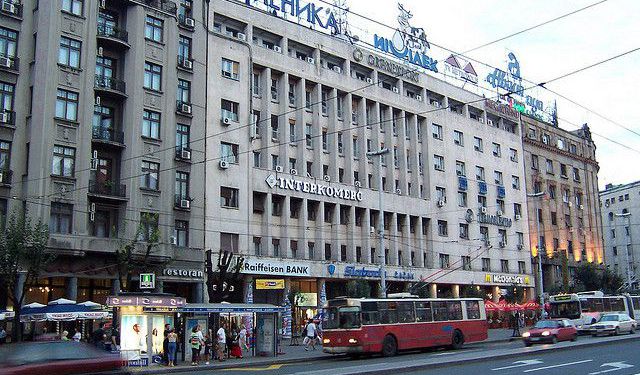 Image by lucianf on Flickr under Creative Commons License.

Whether you want expensive designer wear, high street fashions or unique souvenirs, the city center area from Terazije Street to Slavija Square is a fantastic place to explore. Spread out over an area that covers close to a mile (one and a half kilometers) are many famous international and local brand stores.

If you're one of those shoppers who never needs to look at the price tags, visit the exclusive brand stores on Terazije, such as Frey Wilde, Emporio Armani and Burberry. You can also stock up on more affordable fashions while you are touring the street, at Benetton, Springfield and Serbian brands such as Mona.

Terazije Street hosts one of the highest concentrations of shops in the downtown Belgrade area and encompasses numerous underground passageways and shopping centers lined with shops, cafés and restaurants. In addition to the great shopping, the area also attracts many visitors for Terazije Square, a large central square surrounded by architectural marvels from several eras.

Among them is Albanija Palace which dates back to the 1930s. At the time of its construction it was the tallest building in the Balkans. Another highlight of the square is the fountain with four lion heads that spout water through their open mouths.
How it works: A discovery walk features a route using which you can explore a popular city neighborhood on your own. This walk, along with other self-guided walks in over 1,000 cities, can be found on the app "GPSmyCity: Walks in 1K+ Cities" which can be downloaded from iTunes App Store or Google Play to your mobile phone or tablet. The app's built-in GPS navigation functions allow following this walk route with ease. The app works both online and offline, so no data plan is needed when traveling abroad.