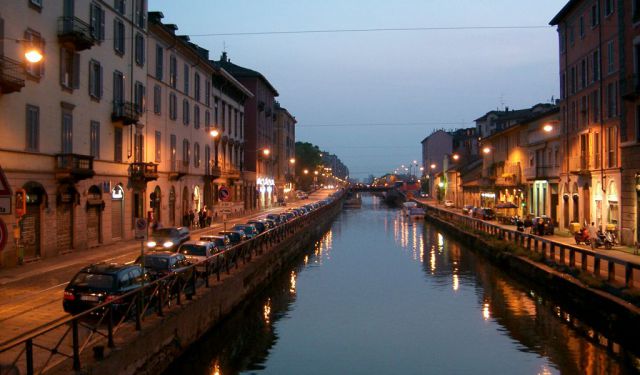 It is so easy to fall in love with Navigli, one of the most romantic and beautiful parts of Milan. The name comes from the navigli, canals that once snaked through the area, connecting with rivers and lakes. Today, only three of those canals survive and of them Naviglio Grande is the most picturesque and rewarding.

Crossing the channel are iron pedestrian bridges, and nearby is the church of Santa Maria delle Grazie al Naviglio. The original church on this site dates back to the middle of the 16th century, but it was demolished in 1908. The current structure was consecrated a year later. Along the canal is Vicolo dei Lavandai, an alley where women used to come to wash laundry. One of the best times to be here, especially if there is romance in your heart is in the early evening when the setting sun is reflected in the water. Then stay for the nightlife to wine and dine in the area’s bars and restaurants. If you are in Milan during the summer, go on a boat tour of the canals. The smallest waterway is based on a design by the polymath Leonardo da Vinci.

Another popular activity in the area is shopping. In addition to the presence of famous brands, there are plenty of places to purchase items that are a little out there, such as bizarre household goods and quirky fashions from second-hand clothing stores. Antique hunters can look for valuable items at the Ripa di Porta Ticinese, where there is an antiques market on the last Sunday of every month.
Image Courtesy of Flickr and Giuseppe Costanza.
How it works: A discovery walk features a route using which you can explore a popular city neighborhood on your own. This walk, along with other self-guided walks in over 1,000 cities, can be found on the app "GPSmyCity: Walks in 1K+ Cities" which can be downloaded from iTunes App Store or Google Play to your mobile phone or tablet. The app's built-in GPS navigation functions allow following this walk route with ease. The app works both online and offline, so no data plan is needed when traveling abroad.