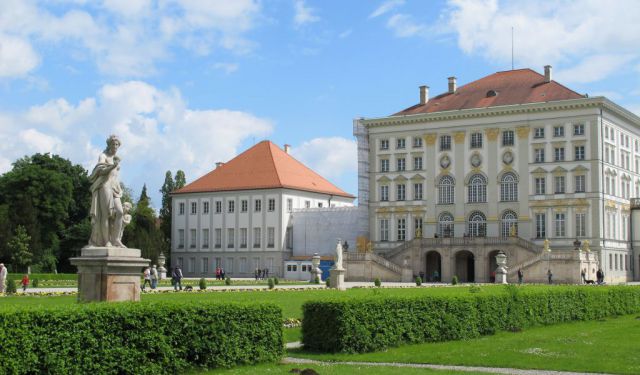 The joint district of Neuhausen-Nymphenburg is to the west of central Munich, a little off the beaten path. Consequently, it is missed by many visitors to the city. That means they don’t have a chance to experience the suburban neighborhood's numerous charms and attractions.

The biggest draw is the Schloss Nymphenburg, a magnificent Baroque palace where Bavarian kings used to spend their summers. Go on a tour of this imposing 17th-century edifice and see rooms with their original Baroque decorations and superlative frescoes. Then explore the palace's adjacent grounds, 500 acres (202 hectares) of lush fields, English-style gardens, lakes and canals that lead up to the palace's grand entrance. Visit the pavilions, sit by fountains and admire the neatly manicured grass.

This isn't the only green space in the area. Hirschgarten Park is a pleasant oasis, home to a large herd of deer. After you’ve strolled through the grounds, stop for refreshments at the park’s 8000-capacity Koeniglicher Hirschgarten, the largest beer garden in Europe. One of the neighborhood's other claims to fame is that it is the site of Siedlung Neuhausen. This was one of the first housing estates in Munich and now enjoys partial protection as a cultural heritage.
How it works: A discovery walk features a route using which you can explore a popular city neighborhood on your own. This walk, along with other self-guided walks in over 1,000 cities, can be found on the app "GPSmyCity: Walks in 1K+ Cities" which can be downloaded from iTunes App Store or Google Play to your mobile phone or tablet. The app's built-in GPS navigation functions allow following this walk route with ease. The app works both online and offline, so no data plan is needed when traveling abroad.