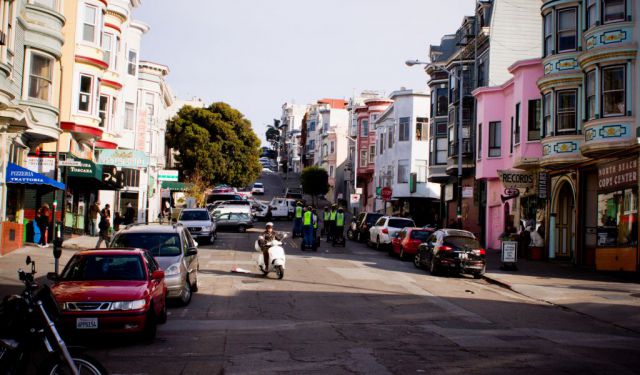 North Beach is San Francisco's Little Italy, with Italian roots that stretch back to the turn of the 20th century. The area abounds with fabulous Italian restaurants, but is also home to many other ethnic groups.

A visit here is to walk on the streets of one of the city's most beloved enclaves, as much a hit with tourists as it is with residents. There are many reasons for this, including its location adjacent to Chinatown and Fisherman's Wharf, the superb culinary traditions, the old world delicatessens and the cafés.

North Beach is also a popular nightlife haunt with its cabarets, jazz clubs, live music and dancing scene. If you venture here at night, start off in one of the restaurants. Although there are many choices on offer, including Japanese and French, Italian restaurants dominate. Their offerings are just as good as any trattoria that you will find in Italy. After your meal go for an ice cream in a gelataria, move onto a bar for a late drink and then hit the dance floor in a club.

If you’re not up for dancing, find a venue that has some cool live jazz tunes playing in the background. You won’t have too far to travel between venues, because many are concentrated in an area that is less than a square mile.
How it works: A discovery walk features a route using which you can explore a popular city neighborhood on your own. This walk, along with other self-guided walks in over 1,000 cities, can be found on the app "GPSmyCity: Walks in 1K+ Cities" which can be downloaded from iTunes App Store or Google Play to your mobile phone or tablet. The app's built-in GPS navigation functions allow following this walk route with ease. The app works both online and offline, so no data plan is needed when traveling abroad.

Image by Mobilus In Mobili under Creative Commons License.