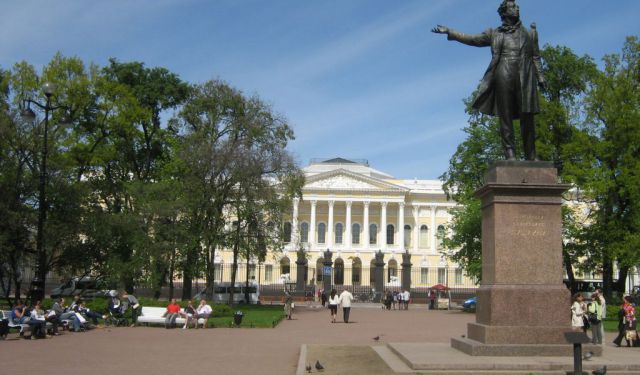 Image by Peterburg23 on Wikimedia under Creative Commons License.

Relish a delightful cultural escape north of Nevsky Prospekt where you will come across the Square of the Arts and the Summer Gardens, theaters, galleries and other sites of interest. The sides of the square are surrounded by former homes and school buildings that now contain important cultural institutions. They present a harmonious sight, being of similar design and form.

Visit the Mikhailovsky Palace, which today houses the Russian Museum. It was established in 1895 and is filled with art treasures. In front of the museum is a magnificent statue of Alexander Pushkin. There are many statues of the acclaimed Russian poet throughout St. Petersburg, but this is considered to be one of the finest.

Other important institutions surrounding the square include the Ethnographic Museum, the Mussorgsky Theater and the Large Concert Hall. Stare in awe at the stunning Church of the Spilled Blood, which was built on the site where Emperor Alexander II was fatally wounded in an assassination attempt.

Amble down Malaya Sadovaya Street, the shortest street in the city. It is home to a clutch of notable buildings, such as the Radio House, the Elisseevskiy Store and the 18th-century Shuvalov Mansion.
How it works: A discovery walk features a route using which you can explore a popular city neighborhood on your own. This walk, along with other self-guided walks in over 1,000 cities, can be found on the app "GPSmyCity: Walks in 1K+ Cities" which can be downloaded from iTunes App Store or Google Play to your mobile phone or tablet. The app's built-in GPS navigation functions allow following this walk route with ease. The app works both online and offline, so no data plan is needed when traveling abroad.