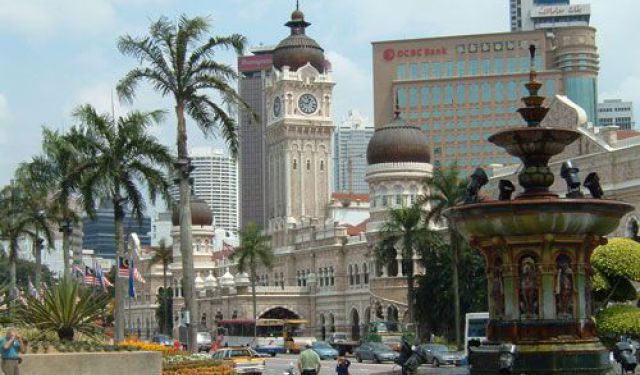 Image by Earth on Wikimedia under Creative Commons License.

Colossal buildings, temples and markets are just some of the draws of Kuala Lumpur's City Center district. Bring your sense of wonder with you as you ride up the elevator to the skybridge of the 88-story Petronas Twin Towers. Other notable buildings in the city center are Jamek Mosque, one of the oldest mosques in Kuala Lumpur and Sri Mahamariamman Temple, the oldest Hindu temple in the city. For more history, stop by Independence Square in the colonial district, where Malaysian independence was declared in 1957. Shoppers will be licking their lips and diving into their wallets and purses with a visit to this part of Kuala Lumpur.

Join the throng of locals and visitors rummaging the stalls of the historic Central Market. It started life as a wet market toward the end of the 19th century and is now an artistic and cultural hub, where you can purchase the work of skilled artists and artisans. Browse the stalls and shops of Chinatown on Petaling Street for curiosities, foods, herbs, spices and imitation goods.

When the sun goes down, this locale is transformed into a busy night market, where goods can be bought for bargain basement prices and where haggling is the order of the day to get even better deals. Don't leave the area without checking out the Sultan Abdul Samad Building. The domes and clock tower of this vast 19th-century structure by Independence Square are illuminated at night.
How it works: A discovery walk features a route using which you can explore a popular city neighborhood on your own. This walk, along with other self-guided walks in over 1,000 cities, can be found on the app "GPSmyCity: Walks in 1K+ Cities" which can be downloaded from iTunes App Store or Google Play to your mobile phone or tablet. The app's built-in GPS navigation functions allow following this walk route with ease. The app works both online and offline, so no data plan is needed when traveling abroad.