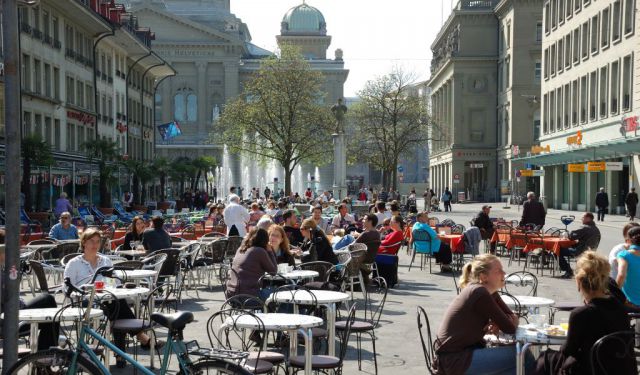 Bern's Old Town has approximately 800 years of history and boasts a beautiful collection of old buildings, some of which date back to the 15th century. Even though most of the medieval town was restored in the 18th century, its original character has remained. And since 1983, the district has been on UNESCO’s list of World Heritage Sites.

The heart of Old Town shopping is Spitalgasse and Marktgasse, the main shopping streets. There are shops, boutiques, high street stores and art galleries. While most of the Old Town's shops are at street level, some are housed in the basements of buildings, so it's worth looking down during your visit to ensure you don't miss anything.

One of the principle streets here is Kramgasse, an attractive shopping avenue with Baroque façades. You will probably find just about anything you want or need in its shops, which include second-hand stores, shopping malls, traditional markets and boutiques. The street was once the center of the city’s urban life.

Bern has around six kilometers of arcades, or “Lauben” as they are known locally, making the city the home of one of the longest covered shopping areas in Europe. There are arcades on many streets, housing boutiques, specialty stores and galleries. Another not-to-be- missed highlight is the outdoor market at Bundesplatz, Bärenplatz and Münstergasse. For most of the year it operates on Tuesdays and Sundays, while during the summer it opens every day.
Image Courtesy of Flickr and Cha già José.
How it works: A discovery walk features a route using which you can explore a popular city neighborhood on your own. This walk, along with other self-guided walks in over 1,000 cities, can be found on the app "GPSmyCity: Walks in 1K+ Cities" which can be downloaded from iTunes App Store or Google Play to your mobile phone or tablet. The app's built-in GPS navigation functions allow following this walk route with ease. The app works both online and offline, so no data plan is needed when traveling abroad.

1) Spitalgasse, Church of the Holy Ghost