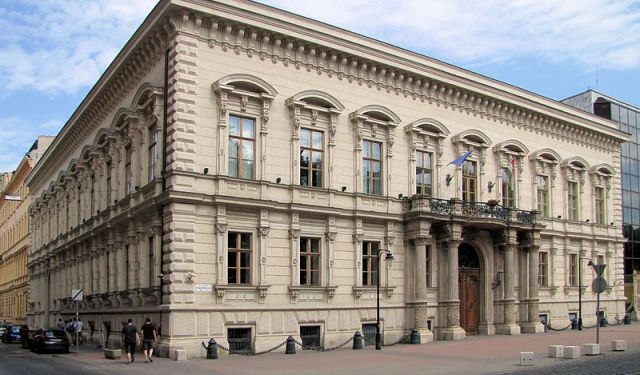 Image by KovacsDaniel on Wikimedia under Creative Commons License.

Wherever you turn in Budapest’s Palace District, you will come across historic buildings and beautiful aristocratic palaces. This is one of the most visually appealing parts of the city and boasts many splendid architectural highlights. It forms the core part of the Eighth District and is also known as Józsefváros.

Lots of noble families built their mansions and palaces here in the late 19th and early 20th centuries. Today, many have been restored to their former splendor and house libraries, hotels and institutions. Among the most popular sites to explore is the Odescalchi Palace which was both a palace and a tenement building. The structure was commissioned by the Odescalchi family and there were two separate entrances and staircases, meaning that the noble family and ordinary residents rarely mixed.
One of the most attractive parts of the area lies within the Grand Boulevard. Here, you will find lovely middle-class houses and delightful public spaces.

During your walk through the Palace District, see the magnificent Festetics Palace which was designed by prominent Hungarian architect Miklós Ybl. This well-preserved 19th-century building features a French Baroque staircase, the original chandeliers and Venetian mirrors. Concerts are occasionally held here. Survey the numerous architectural styles of the former Wenkheim Palace, which was built in 1890. The building is now the Szabó Ervin Library and encompasses Neo-Baroque, Rococo, Neo-Renaissance and Biedermeier elements.
How it works: A discovery walk features a route using which you can explore a popular city neighborhood on your own. This walk, along with other self-guided walks in over 1,000 cities, can be found on the app "GPSmyCity: Walks in 1K+ Cities" which can be downloaded from iTunes App Store or Google Play to your mobile phone or tablet. The app's built-in GPS navigation functions allow following this walk route with ease. The app works both online and offline, so no data plan is needed when traveling abroad.