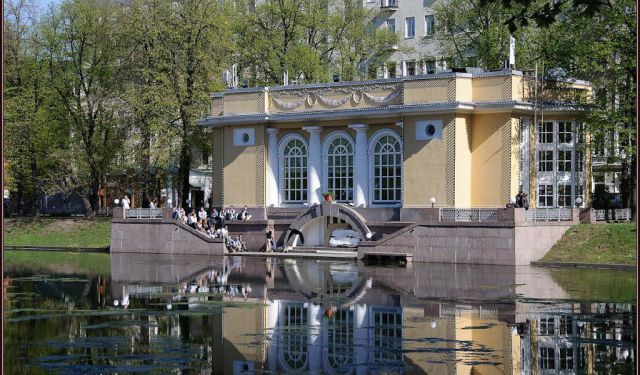 Patriarch's Ponds is an affluent residential area, one of the most exclusive neighborhoods in the city. It dates back to at least the 17th century when Patriarch Ioakim, the eleventh Patriarch of Moscow and All Russia was settled here.

Patriarch’s Ponds is the home of a very famous pond which was immortalized in Mikhail Bulgakov's novel "The Master and Margarita". At the east side of the pond is Café Margarita, which has a mural depicting a scene from the story. Its menu features dishes that Bulgakov wrote about in the dialogue between Amvrosy and Foka in front of the Griboedov house. Nearby is Pavilion, a restaurant that’s housed in an impressive yellow mansion.

During the summer, stroll through the delightful park and enjoy the greenery. If you are here in the winter, ice skate across the pond’s frozen surface. The park is a picturesque spot, not only for the pond and shrubs, but also because it is surrounded by Stalin-era apartments.

During your park visit, look at the huge statue of 19th-century Russian writer Ivan Krylov. Russian children are very familiar with his name because of his didactic tales. Then go for a walk down Spiridonovka, a short street that features three museums. They include the Alexey Tolstoy Museum in the building where the writer lived for a while.
How it works: A discovery walk features a route using which you can explore a popular city neighborhood on your own. This walk, along with other self-guided walks in over 1,000 cities, can be found on the app "GPSmyCity: Walks in 1K+ Cities" which can be downloaded from iTunes App Store or Google Play to your mobile phone or tablet. The app's built-in GPS navigation functions allow following this walk route with ease. The app works both online and offline, so no data plan is needed when traveling abroad.