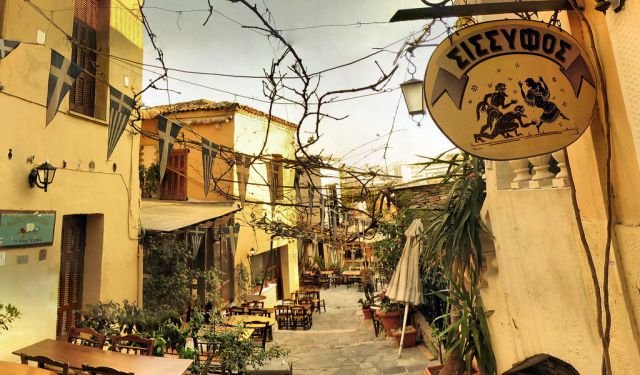 Image by Panoramas on Flickr under Creative Commons License.

Plaka is one of the most beautiful and oldest parts of Athens, and nestles in the shadow of the Acropolis. Delight in its labyrinth of winding streets that are filled with traditional houses, some of which date back to the 19th century. There are also plenty of cafés with seats that spill out onto open terraces. Browse the tourist shops for their paintings, carvings and hand-painted icons, and sample some Retsina and olives in an old taverna. From your table on a flower-decked shaded terrace watch the scenes of neighborhood life unfold before you as flower sellers, street musicians and residents go about their business.

Visit some of Plaka’s fascinating museums, including the Greek Folk Art Museum and the Children's Museum, then explore the ancient sites. Among the historic structures in this part of the city is the Tower of the Winds, which originates in Roman times and the 18th-century Doorway of the Medrese.

Be sure to spend some time in the settlement of Anafiotika, considered to be the loveliest part of Plaka. This 19th-century neighborhood is on the northern slopes of the Acropolis and is characterized by its Cycladic houses that are painted brilliant white and decorated with splashes of growing bougainvillea.
How it works: A discovery walk features a route using which you can explore a popular city neighborhood on your own. This walk, along with other self-guided walks in over 1,000 cities, can be found on the app "GPSmyCity: Walks in 1K+ Cities" which can be downloaded from iTunes App Store or Google Play to your mobile phone or tablet. The app's built-in GPS navigation functions allow following this walk route with ease. The app works both online and offline, so no data plan is needed when traveling abroad.