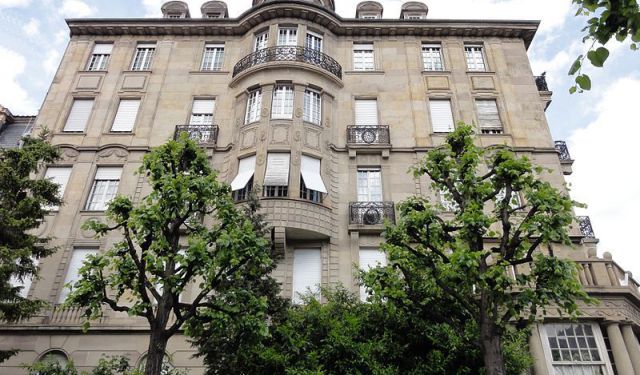 Image by Ralph Hammann on Wikimedia under Creative Commons License.

Beautiful buildings are in plentiful supply in Strasbourg with some located in Quartier des XV. This old district dates back to the 19th century and was named after the Conseil des XV (or Council of XV). This was Strasbourg's governing body from 1433 up to the time of the French Revolution in the late 18th century, and it owned a large amount of land in what is today’s district.

Until the 1880s, this area remained outside of Strasbourg’s city walls. Among the numerous architectural highlights of this prestigious part of the city are redbrick buildings such as the Strasbourg Faculty of Economics and Management (PEGE). This late 19th-century building originally served as a supply center of military provisions. Although completely renovated in 1999, the architects kept the existing façade intact.

The city's military past can also be seen in the Lecourbe district. Elsewhere in Quartier des XV, there are bourgeois buildings and former hôtels particuliers. These were once the stately townhouses of nobleman, and are beautiful constructions, some with grand windows and columns adorning their façades. While you are in the quarter, take a break from your walking and sightseeing activities and relax in one of the district’s delightful parks.
How it works: A discovery walk features a route using which you can explore a popular city neighborhood on your own. This walk, along with other self-guided walks in over 1,000 cities, can be found on the app "GPSmyCity: Walks in 1K+ Cities" which can be downloaded from iTunes App Store or Google Play to your mobile phone or tablet. The app's built-in GPS navigation functions allow following this walk route with ease. The app works both online and offline, so no data plan is needed when traveling abroad.

Image by Ji-Elle under Creative Commons License.
Where To Stay in Strasbourg, France - Guide of Best Areas and Hotels