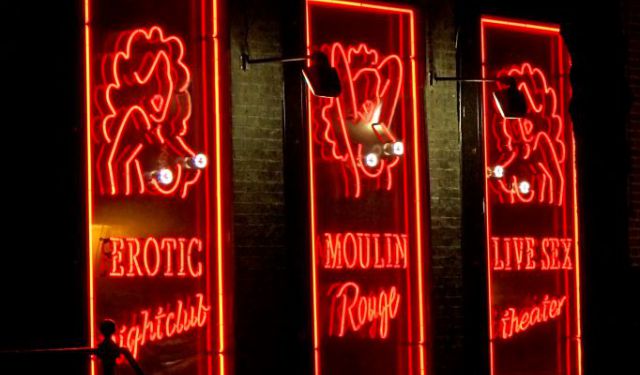 Image by Dennis Jarvis on Flickr under Creative Commons License.

Amsterdam is a very liberal city, no more so than in its famous red light areas. The largest and best known red light district is De Wallen where you will see scantily clad prostitutes behind the glass windows of their one-room cabins. Prostitution in licensed clubs, brothels and homes is legal in the city, although street prostitution is not. The area also has numerous sex shops, peep shows, a cannabis museum and coffee shops that sell marijuana. There is also a sex museum, which presents a rich collection of photos, arts and objects related to sex and sexuality.

On Zeedijk Street, find Café ‘t Mandje. This lays claim to being the first gay bar in the Netherlands and one of the first in the world. One of the area's most famous thoroughfares is Oudezijds Voorburgwal where there are more window prostitutes, peep shows, brothels and coffee shops. The street also fascinates with its grand canal houses and the remains of monasteries from the Middle Ages. There's a lot more history on display at the 800-year-old Oude Kerk ("old church"), the city's oldest church and oldest building.

One of Amsterdam’s oldest streets is Warmoesstraat ('Chard Street') with roots that go back to the 13th century. Here, like some of the other streets in the area, you can find coffee shops and sex boutiques. The Prostitution Information Center is also on this street and is where you can dine in the lunchroom and find out more about the red light district.
How it works: A discovery walk features a route using which you can explore a popular city neighborhood on your own. This walk, along with other self-guided walks in over 1,000 cities, can be found on the app "GPSmyCity: Walks in 1K+ Cities" which can be downloaded from iTunes App Store or Google Play to your mobile phone or tablet. The app's built-in GPS navigation functions allow following this walk route with ease. The app works both online and offline, so no data plan is needed when traveling abroad.