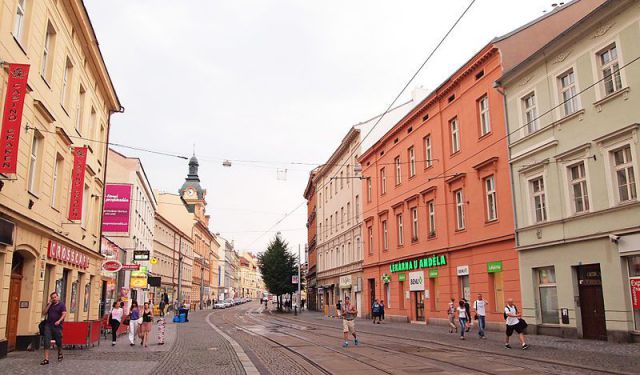 Image by Tiia Monto on Wikimedia under Creative Commons License.

The Prague district of Smíchov is situated on the west bank of the Vltava River, and for much of its early history was an agricultural area. Then came the Industrial Revolution and its factories and workshops. In the last two decades, the locale has undergone a dramatic transformation, and is now an upscale neighborhood with newly renovated houses. Visitors come for its shops, restaurants, bars and cultural attractions.

For some delightful retail therapy, head to Nový Smíchov shopping center, right by the metro station. There are three floors of shops and restaurants to explore. Fans of architecture may want to look over the Angel building, a vast glass edifice by French architect Jean Nouvel. On its façade is etched the angel from Wim Wenders’ movie Wings of Desire. Elsewhere in Smíchov, relax in any of the small squares that form mini parks. They include Arbesovo náměstí and Náměstí 14. Října.

The neighborhood has also earned a good reputation as a nighttime hangout, especially because of its trendy restaurants. There is also a good selection of pubs with one of the stellar attractions being the Staropramen Brewery, a Prague brewer since 1869. Book a guided tour and then sample some of the produce.
How it works: A discovery walk features a route using which you can explore a popular city neighborhood on your own. This walk, along with other self-guided walks in over 1,000 cities, can be found on the app "GPSmyCity: Walks in 1K+ Cities" which can be downloaded from iTunes App Store or Google Play to your mobile phone or tablet. The app's built-in GPS navigation functions allow following this walk route with ease. The app works both online and offline, so no data plan is needed when traveling abroad.