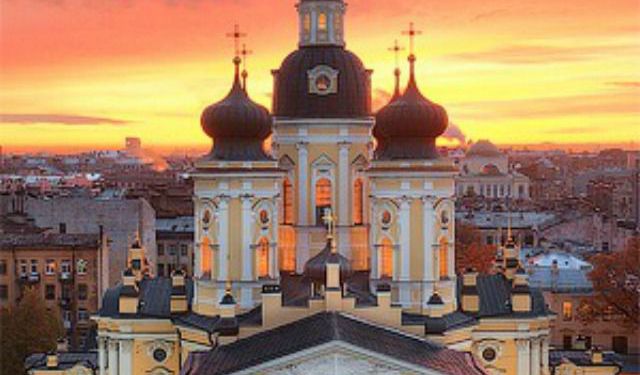 Image by Ivan Smelov on Wikimedia under Creative Commons License.

Many writers have waxed lyrical about South of Nevsky and the series of canals that cut through it. In particular, they have marveled at the views from here of St.Petersburg's grandeur. The area retains much of its original character which can be easily seen on a walk through the dense network of small streets and lanes.

There are many beautiful old buildings to be admired with a stroll down Povarskoy Lane. The name translates as Cook Lane, because this is where many cooks settled during the 18th century. Most of the buildings date back to the 19th and early 20th centuries and were also where noted men of letters lived, such as Simonov, Garshin, Nekrasov and Turgenev.

Go down Marat Street where many of the buildings have a protected status. Linger for a while and look over their architectural design details. Visit one of the area's most beautiful buildings, Our Lady of Vladimir Church. This multi-domed Russian Orthodox Church is dedicated to Our Lady of Vladimir and was built in the 18th century. At night it is an even more spectacular sight when it is illuminated. South of Nevsky is a wonderful place to hang out, with fantastic water views and beautiful architecture that delight and excite in equal measure.
How it works: A discovery walk features a route using which you can explore a popular city neighborhood on your own. This walk, along with other self-guided walks in over 1,000 cities, can be found on the app "GPSmyCity: Walks in 1K+ Cities" which can be downloaded from iTunes App Store or Google Play to your mobile phone or tablet. The app's built-in GPS navigation functions allow following this walk route with ease. The app works both online and offline, so no data plan is needed when traveling abroad.