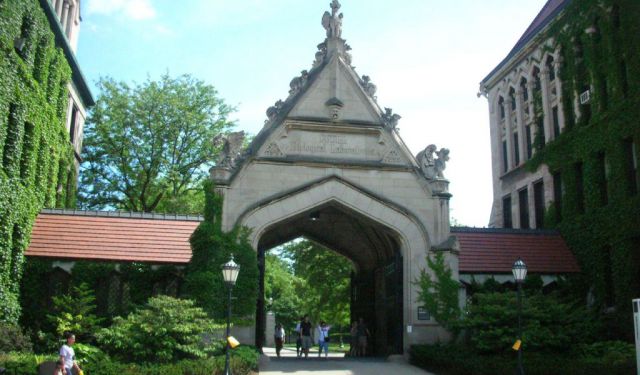 Image by Richie Diesterheft on Flickr under Creative Commons License.

The leafy streets, beautiful architecture and historic buildings make a walk around the Hyde Park area of Chicago a real joy. This is one of the most famous of the city’s neighborhoods and at its heart is the University of Chicago and its campus. This august institution is sometimes referred to as "Nobel Alley" because of the large number of Nobel laureates who have worked here.

Wander through the campus and stop by its landmark buildings. Visit the Mansueto Library, a stunning glass edifice that resembles a half-buried glass Faberge egg. Cinemagoers may recognize it from the movie Divergent. Next, go to the Rockefeller Memorial Chapel, a Gothic building that is the tallest structure on the campus. It is named after the University's Baptist founder, John D. Rockefeller. Tour Robie House, designed by one of the country's greatest ever architects, Frank Lloyd Wright. The property was named a National Historic Landmark in 1963.

Browse the exhibits of the Oriental Institute, a museum dedicated to the history, art and archeology of the ancient Near East. The museum's treasures include ancient artifacts from numerous countries such as Israel, Egypt, Syria, Iraq and Iran. See statues, pottery and everyday objects that are thousands of years old.
How it works: A discovery walk features a route using which you can explore a popular city neighborhood on your own. This walk, along with other self-guided walks in over 1,000 cities, can be found on the app "GPSmyCity: Walks in 1K+ Cities" which can be downloaded from iTunes App Store or Google Play to your mobile phone or tablet. The app's built-in GPS navigation functions allow following this walk route with ease. The app works both online and offline, so no data plan is needed when traveling abroad.

9) University of Chicago, Division of the Humanities