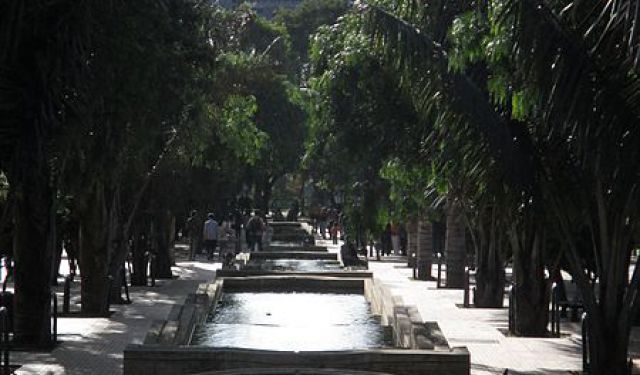 Image by Pedro Felipe on Wikimedia under Creative Commons License.

Veracruz is an attractive neighborhood in the eastern part of Bogota that revels in its historic buildings, parks, museums and beautiful architecture. Chill out by the fountains in Santander Park and see the statue of Francisco de Paula Santander, the former President of Gran Colombia, whom the park is named after.

On the southeast side of the green expanse is the Environmental Axis (Eje Ambiental), the main road through the historic center, which is also known as Avenida Jimenez. It was built on the San Francisco River and is pedestrianized. The highlights of an amble down its tree-lined sidewalks are such historic and famous buildings as the 17th-century Church of Our Lady of the Waters and the house where the liberator Simon Bolivar lived. There is also a monument dedicated to the revolutionary leader at nearby Journalists Park.

One of the most fascinating places in Veracruz is the Gold Museum with its rich displays of pre-Spanish artwork on gold. There are thousands of pieces on display at any one time, including ceremonial gold items, jewelry and gold adornments for clothes. To learn more about the area’s past, go to the 16th-century Veracruz Church, one of Bogota's first ever buildings. Inside the chapel are the final resting places of several national heroes who were executed during the Spanish reconquest.
How it works: A discovery walk features a route using which you can explore a popular city neighborhood on your own. This walk, along with other self-guided walks in over 1,000 cities, can be found on the app "GPSmyCity: Walks in 1K+ Cities" which can be downloaded from iTunes App Store or Google Play to your mobile phone or tablet. The app's built-in GPS navigation functions allow following this walk route with ease. The app works both online and offline, so no data plan is needed when traveling abroad.