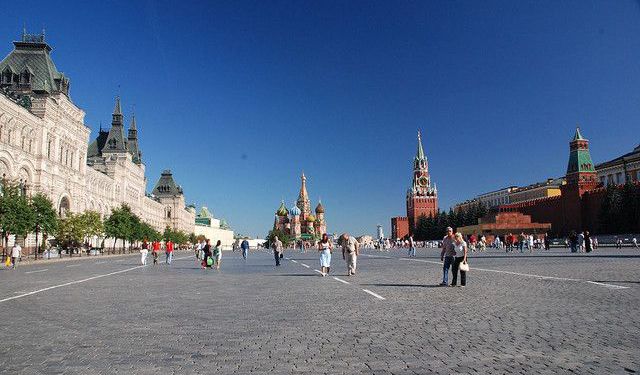 Image by magical-world on Flickr under Creative Commons License.

A Walking Tour in Kitai-Gorod, Moscow (Self Guided), Moscow

Kitai-Gorod means China town in the Russian language. This is one of the oldest historical sites in the center of Moscow. In the past, Kitai-Gorod's territory was occupied by traders and craftsmen. Today the famous district is a preserved zone, due Gostiny Dvor, Moscow's first Print Yard, and other meaningful attractions that are presented in the guide below.
How it works: Download the app "GPSmyCity: Walks in 1K+ Cities" from iTunes App Store or Google Play to your mobile phone or tablet. The app turns your mobile device into a personal tour guide and its built-in GPS navigation functions guide you from one tour stop to next. The app works offline, so no data plan is needed when traveling abroad.

1) Church of All Saints

The Church of All Saints is one of the oldest churches in Moscow. Located in the Slavic area near Solyanka, the building is a five minute walk from the Kremlin. This remarkable place of worship was built by Dmitry Donskoy, in the 14th century, to celebrate the memory of soldiers who died in the Battle of Kulikov.

Some say the church site appeared long before the initial construction in 1380. That, in fact, a much earlier battle in 1367 is the basis for the existence of the church. The church is often associated with the Virgin Ekonomissy, a miracle performing religious icon.

In 1488, the wooden structure was replaced with stone. During 1687 to 1689, the church was redesigned to reflect the popular Muscovite Baroque style: four-tier towers and a dome temple. During the 1930s, the church was used by secret police to conduct executions. In 1975, the museum became the property of the Museum of History of Moscow. In 1991 the Church of All Saints was returned to the Russian Orthodox Church. A cross was installed in the church in 1994 to remember all the victims of tyranny. Since 1998, the metochion of the Eastern Orthodox Church of Alexandria has been housed in the church.

Image by Kmorozov on Wikimedia under Creative Commons License.
2

Church of Saint George is an important representative of Russian architecture of the 17th century. The cathedral and its five chapels were built in 1657. Later, a bell tower was added, which contrasts with the church building because of its vivid colors.
Image by Andrey Surikov on Wikimedia under Creative Commons License.
3

Old English Court is a 16th century museum that was home to Russia's first emissaries to England. It is one of the oldest secular buildings in Russia. The court was also a site where English merchants were allowed to trade duty free in return for providing military provisions to Ivan the Terrible. Opened in 1994 during the visit of Queen Elizabeth II, the museum is host to an exhibit that displays its medieval roots.

Ivan the Terrible presented the home to English merchants who were searching for a northern passage to India. Instead, the merchants accepted Ivan’s offer of unlimited duty-free trade and a headquarters. This gift resulted in good trade relations between Russia and England for almost one hundred years.

The museum experienced many renovations, some of which completely changed the appearance of the building. The museum has been fully restored to its Muscovite glory and each room reflects an aspect of the Anglo-Russia trade.

Exhibitions, concerts, and events that are specifically geared towards children frequently occur at the court. An average of 38,955 people visits the museum each year.

Image by NVO on Wikimedia under Creative Commons License.
4

Gostiny Dvor, also known as Old Merchant Court, is a shopping center located in Kitai-Gorod. It is also a stunning piece of Russian architecture and frequently the setting for concerts, fashion shows, exhibitions, parties, et cetera. Montserrat Caballé and José Carreras are two of the many famous artists who have performed concerts at the center.

Gostiny Dvor, as we now know it, came to be in the 18th century when Catherine the Great asked Italian architect Jacomo Kvarnegi to rebuild the original brick structure to ease overcrowding. After a delay caused by her death, the initial reconstruction was completed in 1830. In 1995, the complex was remodeled to repair damages due to the ravages of time. In addition, the building was updated to make it more accessible and stylish.

One of the largest shopping centers in Russia, it occupies an entire street block. Offices, shops, banks, cafés, a photo gallery, and restaurants are located in the complex. A trip to Gostiny Dvor is worth it if for no other reason to view the outstanding design. The shopping center is open seven days a week from 10 am to 10 pm. An average of 40 events or exhibitions takes place each year.
Image by Kmorozov on Wikimedia under Creative Commons License.
5

Revolution Square ('Ploshchad Revolyutsii') is located in the center of Moscow, in Tverskoy District, northwest of Red Square. The square has the shape of an arc running from the southwest to the north. There are three Moscow Metro stations located under the square, all of them having at least one exit at the square: Ploshchad Revolyutsii, named after the square, Teatralnaya, and Okhotny Ryad. All these stations are transfer stations, with Teatralnaya being connected with the other two.

Originally, the Neglinnaya River, a tributary of the Moskva River, currently underground, was flowing through the area. Between 1534 and 1538, the wall of Kitay-gorod with Iberian Gate and Chapel was constructed. In 1817-1819, the Neglinnaya was rebuilt as a tunnel, and thus the area became a square. It got the name of Voskresenskaya Square (Resurrection Square), after the other name of Iberian Gate, Resurrection Gate. In 1918, the square was renamed after the October Revolution.

Why You Should Visit:
The square has several impressive historical buildings such as Hotel Metropole as well as interesting monuments like the Karl Marx monument and the Vitali Fountain at the northeast end.
This is where you will also find the zero mile marker from which all distances from Moscow are measured.
Perhaps not a prime destination location but worth a stop if you're in the neighborhood.
Image by NVO on Wikimedia under Creative Commons License.
6

Originally built in 1553, the Moscow Print Yard was one of the first state-owned printing houses. It is currently one of the biggest publishing houses in Russia and an important part of Russian literary history.

Located in the Kitai-Gorod business district, the print house is also known as the Anonymous Printing House due to many of the books they published having no printer’s imprint. The industry-standard print-ready shop prints all standard documents: catalogues, letter-head, magazines, journals, brochures and also offers design services.

Censorship helped to make the print house a leader in publishing. Private publishing was not allowed by the state until the 1700s and only then with limited freedom. In the 1900s, the press was allowed to have more autonomy which resulted in more competition.

Well-known literature published by the Moscow Print Yard includes: Lenten Triodion, Chasovnik, Apostle, Triodion in Pictures, Gospel, and Psalter. The first Russian newspaper, Vedomosti, was also printed by their presses. It is the repository of 500 Greek manuscripts. The Alphabet, a book that was presented to Peter the Great, was printed by the Moscow Print Yard. A multilingual staff: English, German, and Italian operate the printing house 24 hours a day Monday through Friday.
Image by travellingred on Flickr under Creative Commons License.
7

One of the most expensive shopping centers in the world, Tretyakovsky Proyezd is located in the renowned Kitay-Gorod business district in Moscow. Located just minutes from the Kremlin, this hub is home to upscale stores Ferrari, Armani, Ralph Lauren, Dolce and Gabbana, Gucci, Prada, and Bentley Motors Limited, and many more boutiques, restaurants, and offices. Tretyakovsky Proyezd is also famous for being located on one of the shortest roads in the world.

Local folklore is that the Tretyakov brothers conceived the archway in the 19th century so that they enter the business district without paying taxes. At that time, all vendors had to pay taxes before entering Kitay-Gorod since they could only enter the district through Kitay Gorod gates. The gate also alleviated traffic jams on a nearby street. Architect Alexander Kaminsky designed the archway.

Tretyakovsky Proyezd is one of the few surviving structures that surrounded 19th century Moscow. Although it fell into disrepair for many years, recent renovation projects have restored it to its former glory. In addition to the upscale retailers, other reasons to visit include: an authentic tropical garden, one of the largest Gucci stores in the world, art galleries, a swimming pool, and daily fashion shows.
Image by Eden87 on Wikimedia under Creative Commons License.

The Garden Ring is the major circular avenue around downtown of Moscow. Originally, the Garden Ring was built as a defensive fortification for Moscow. Today, the circumference of sixteen kilometers of the avenue is rich in architectural beauties, monuments, museums etc. The tour suggested below will help you get more familiar with Moscow's Garden Ring and its fascinating sights.

It would be a pity to leave Moscow without having explored its specialty shops and bringing home something truly original. We've compiled a list of gifts and souvenirs, which are unique to Moscow, that a visitor might like to purchase to reflect their visit.

Museum Walk in the Center of Moscow

Moscow is the capital of Russia and the cultural center of the country. The city boasts a large number of museums which reveal Russia's culture and development. Take this hour tour to visit Moscow's most representative museums in the center of the city.

Also known as VDNKh, the All-Russian Exhibition Center in Moscow is a large complex that occupies a territory of 3 square kilometers and has 400 buildings. The complex provides commercial space for major exhibits, and houses Russia's most important monuments, such as Worker and Kolkhoz Woman, the Friendship of Nations fountain, monument to the Conquerors of Space etc. Don't miss the...  view more