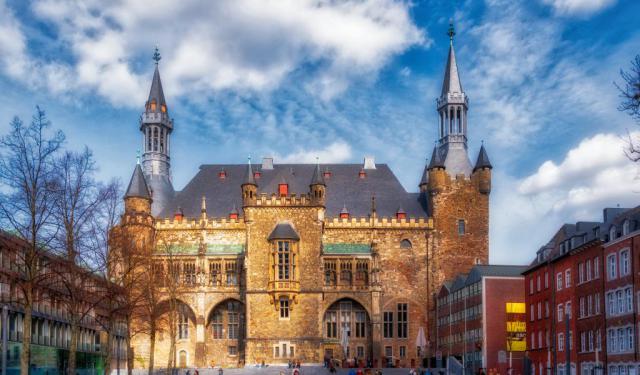 Image by Jose Luiz on Wikimedia under Creative Commons License.

Aachen is historically known as a spa city, a favoured residence of King Charlemagne and the place of coronation of German kings. Due to its glorious past, the city houses numerous prominent sights, valuable landmarks and precious attractions. Follow the next self-guided tour to see the most interesting and famous Aachen landmarks.
How it works: Download the app "GPSmyCity: Walks in 1K+ Cities" from iTunes App Store or Google Play to your mobile phone or tablet. The app turns your mobile device into a personal tour guide and its built-in GPS navigation functions guide you from one tour stop to next. The app works offline, so no data plan is needed when traveling abroad.

The Marketplace in Aachen is right in front of the ancient City Hall. It is a perfect place for relaxing. You can hang out with friends, go get a nice beer or have icecream. This is especially true during summer, however, in winter the Christmas market will be at the market, too.

Charlemagne Fountain is located in the middle of the Market Place and is one of the most prominent and valuable fountains in Aachen. The fountain depicts the emperor Charlemagne, standing with his crown, orb, scepter and knight's armour. He was the king of the Franks from 768 and emperor of the Romans, and was a significant European personality. However, this is the replica of the original statue, which can be found in the Coronation Hall of the Town Hall.

Image by CherryX on Wikimedia under Creative Commons License.
Sight description based on wikipedia
2

Couven Museum is another cultural venue in Aachen that can be found on Hühnermarkt. It displays vast collections, including high quality furniture, Dutch ceramic tiles, porcelain, kitchen appliances, embossed ornaments, silverware, coffee pots, fine chimney pieces, Italian stucco works, etc. The museum highlights the style of daily living in the 18th and 19th centuries. In 1662 this building housed a pharmacy, where herbs and chocolate were produced and sold. The museum is closed on Mondays.
Image by Lokilech on Wikimedia under Creative Commons License.
3

Krämerstraße is another popular shopping street, situated in the heart of the historic district. This pedestrian street is one of the oldest and most beautiful shopping streets in Aachen that starts from the fabulous Market place and stretches to Münsterplatz. Here you can find coffee, tea, clothes, jewelry, specialty shops, small elegant boutiques and nice cafes.
Image by Jim Linwood on Flickr under Creative Commons License.
4

Aachen Town Hall or Rathaus is an impressive Gothic building, located in the heart of the historic centre. Built in the 14th Century on the site of Charlemagne's palace, it houses historic rooms which are open to visitors. There you will find numerous valuable exhibits, related to the city’s history and art. Inside the Coronation hall you will see renowned Rethel frescoes dating back to the 19th century. The northern part of the façade of the building is decorated with 50 statues of German kings and emperors, 31 of which were crowned in Aachen.
Image by Lokilech on Wikimedia under Creative Commons License.
5

Dolls' Fountain or Puppenbrunnen is another interesting fountain in Aachen, created by Boniface Stirnberg in 1975. All movable bronze marionettes have their own meaning: horse and rider symbolize Horse Show (CHIO- the Aachen international equestrian tournament), market woman – trading, prelate – church, fashion doll - textile industry, professor and harlequin - doctrine and culture. On top of the fountain you will see a figure of the cock that reminds us of the French occupation.
Image by Trexer on Wikimedia under Creative Commons License.
6

Fountain “Circulation of Money” or Kreislauf des Geldes is an original fountain and interesting landmark in Aachen. Situated in the historic centre near Elisengarten, it was created by Karl-Henning Seemann in 1976. Depicting the circulation of money, the fountain presents six bronze figures: a woman that symbolizes the thrift, while the leaning man shows the avarice. You can also see a father with his child explaining how to deal with money. The centrifugal movement of water exemplifies the steady flow of money.
Image by Ahoerstemeier on Wikimedia under Creative Commons License.
7

Aachen Cathedral, frequently referred to as the "Imperial Cathedral", is a Roman Catholic church. The church is the oldest cathedral in northern Europe and was known as the "Royal Church of St. Mary at Aachen" during the Middle Ages.

For 600 years, from 936 to 1531, the Aachen chapel was the church of coronation for 30 German kings and 12 queens. The church is the episcopal seat of the Diocese of Aachen. The core of the cathedral is the Carolingian Palatine Chapel, which is notably small in comparison to the later additions.Charles the Great began the construction of the Palatine Chapel around 792 and it was consecrated in 805 by Pope Leo III in honour of the Virgin Mary.

The Aachen cathedral treasury displays sacral masterpieces of the late Classical, Carolingian, Ottonian and Staufian period and it is regarded as one of the most important ecclesiastical treasuries in northern Europe. In 1978, it was one of the first 12 items to make the entry into the UNESCO list of world heritage sites, as the first German and one of the first three European historical ensembles.

Image by Arnold Paul on Wikimedia under Creative Commons License.
Sight description based on wikipedia
8

The celebrated Aachen Cathedral is surrounded by numerous stores and shops. In almost every shop near the cathedral you can find prominent Aachener Printen. This delicious local specialty of Aachen is a traditional German bakery product, which was originally a stonehard type of sweet bread, baked in large flat loaves.
Image by Benjamin Wittorf on Flickr under Creative Commons License.
9

The Greek Orthodox Church is another religious sight in Aachen, situated on Jesuitenstraße in the centre of Aachen. This religious building is a Greek orthodox church, dedicated to Saint Michael and Saint Dimitrios. Right above the entrance you can see a fine sculpture of Saint Michael. The Jesuitenstrasse (Jesuits road) already existed in Roman times and was the Via Principalis - a military camp. In 1579 two Jesuits came to Aachen, however they left the city in 1581. In 1600 the council of the town took the decision to recruit and settle Jesuits in Aachen. In 1618, on May 28th was held the ground-breaking ceremony and in 1928 the church was completed. With the dissolution of the Jesuit Order in September 1773 the church was closed and converted into a granary during the French period, later it was used as a parish church. In 1987 the Greek Orthodox community of St. Dimitrios purchased the building.
Image by Norbert Schnitzler on Wikimedia under Creative Commons License.
Sight description based on wikipedia
10

Aachen's Municipal Theatre is an impressive building with eight marvelous columns, situated on Theaterplatz. It offers a wide range of cultural performances including opera, operettas, drama, ballet and music concerts. The theatre was founded in 1822 in honour of the 25th Jubilee of the Prussian King Friedrich Wilhelm III. Aachen's Municipal Theatre has its own symphony orchestra. During the Second World War it was almost completely destroyed. After the war, the theatre was rebuilt and reopened in 1951.
Image by Martin Möller on Wikimedia under Creative Commons License.
11

Elise Fountain or Elisenbrunnen is another prominent city landmark and is a Classical building created by architects Johann Peter Cremer and Karl Friedrich Schinkel in 1827. The building was named in honour of Princess Elisabeth of Bavaria Ludovika (Elise), daughter of Bavarian King Maximilian I. Originally it was a drinking fountain and brings to mind the glorious times when Aachen was a spa and a health resort. The Elise fountain consists of an open foyer with fine columns and is a symbol of the Aachen spa culture.
Image by Ahoerstemeier on Wikimedia under Creative Commons License.
12

Walking in the historic centre of Aachen, continue your shopping on Holzgraben Street. It can be found in the Aachen historic centre and stretches from Büchel Street to Elisenbrunnen. This street is home to several shopping outlets, offering clothes in all variations.
Image by Jim Linwood on Flickr under Creative Commons License.
13

In the great city centre pedestrian zone you will find Adalbertstrasse, which is the main shopping street in Aachen. This commercial street is home to a wide variety of different stores, where you will find everything you want. Here you can get fashionable boutiques, famous brands, trendy designer shops and much more. Adalbertstrasse also houses the prominent, basic German department store, Galeria Kaufhof.
Image by Piratenpartei Aachen on Flickr under Creative Commons License.
14

St. Adalbert’s Church is located on Kaiserplatz, which stands on a big rock near an old Roman road. It is one of the oldest churches in Aachen and it is a Catholic church, dedicated to St. Adalbert, the “apostle of eastern Europe”. The original building was founded by emperor Otto III in Medieval times. The consecration of the church took place in 1005. After its near-total demolition during World War II, the church was re-established and renovated inside and out.
Image by Túrelio on Wikimedia under Creative Commons License.
15

St. Peter’s Church is situated on Peterskirchhof and is one of the oldest churches in Aachen. Dedicated to St. Peter, the church was built on a former Roman burial site and was first heard of in 1215. The present Baroque-style brick structure dates back to 1717. Presumably its bell tower was part of the Medieval city walls. The church houses an old altar with Baroque carvings, the copy of the Pietà from the 15th century, Anthony's sculpture created by sculptor Gustav Angelo Venth, 19th century icons and liturgical vessels from the Baroque period.
Image by Euku on Wikimedia under Creative Commons License.
16

Großkölnstraße is located in the Aachen historic centre and represents the second important shopping area in Aachen. This pedestrian zone houses a huge number of diverse shops, which will offer you an extensive assortment of clothes and other excellent products. Aside from fashionable brands and stylish clothes, you will find traditional German sweets and candies.
Image by Tristan Martindale on Flickr under Creative Commons License.

Aachen is an old historic city where you will find a wide number of old churches. Dating back from Medieval times to the 20th century, these sacred places are valuable from historical, architectural and cultural points of view. This self-guided tour will lead you through the most prominent religious sights in the city.