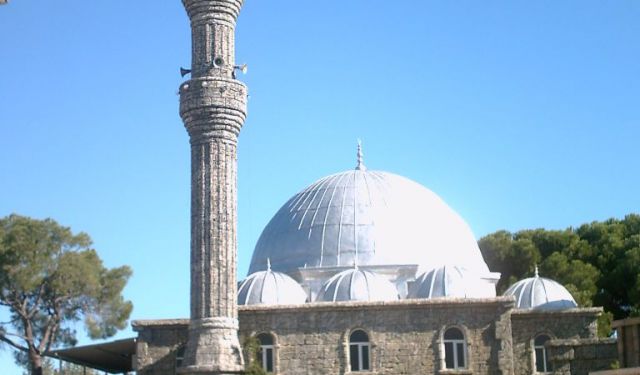 Image by R. Engelhardt on Wikimedia under Creative Commons License.

A stay in Antalya is not complete without a stopover so see at least some of the multitude of tombs and places of worship. They offer Antalya an enchanting combination of the present and the past, impressive grandeur and prehistoric wonder. Check out this list of tombs and places of worship around Antalya that you might like to visit.
How it works: Download the app "GPSmyCity: Walks in 1K+ Cities" from iTunes App Store or Google Play to your mobile phone or tablet. The app turns your mobile device into a personal tour guide and its built-in GPS navigation functions guide you from one tour stop to next. The app works offline, so no data plan is needed when traveling abroad.

The St. Paul Cultural Center and Union Church is always glad to welcome you. Whether you want to pray or to worship, this church is happy to serve you. On weekdays, Paul's Place is a cafe that offers a cultural blend of new friends or a library for a quiet read to go with a variety foods and beverages. Services are held in English, Turkish, and Russian. Christians of any denomination are welcome, as are non-Christian visitors.
Image by echiner1 on Flickr under Creative Commons License.
2

The Korkut Mosque has a past full of events since Ottoman times. It was built in the 2nd century A.D but 4 centuries later the temple was knocked down. Because of Arab invasion in the 7th century it was dramatically destroyed and in the 9th century was repaired. During Selcuk times it was transformed to a Mosque but in 1361 it was re-transformed to a church. During 1470-1509 it was converted again to a Mosque. In 1896 it was seriously damaged by a fire.
Image by PAVDW on Flickr under Creative Commons License.
3

The Kesik Minare standing in the streets of Kaleiçi was originally built as a Roman temple in the 2nd century AD. In the 7th century, it was converted into a Byzantine church in honor of the Virgin Mary, but it was heavily damaged in the 8th century during the Arab invasions. In the 10th century it was repaired again. The church was converted into a mosque when the Great Seljuq Empire acquired Antalya. It was then when the actual minaret was added. In 1361 - when the crusader king of Cyprus took Antalya from the Seljuks - it became a church again, only to become reconverted into a mosque during the rule of Sehzade Korkut. The temple turned church turned mosque was destroyed in a fire of 1846, but the minaret survived, as the Kesik Minare.
Image by Marleaud on Wikimedia under Creative Commons License.
Sight description based on wikipedia
4

Iskele Mosque is a very small, charming mosque in the old Yacht Harbor area. Historical documents are not specific about its time of construction, except that it was renovated as part of the Inner Bailey restoration project. Situated near the marina, this eye-catching 19th century mosque was built of white stone with a short minaret and is supported by four columns.
Image by Beth Rankin on Flickr under Creative Commons License.
5

Yivli Minare (also called the Fluted or Grooved Minaret) is located behind the mosque of the same name and is a separate structure. A four-sided base supports a minaret composed of eight fluted sections, which enclose a series of 90 steps leading to the top. Its very beautiful blue and dark blue tiles draw one's attention to this landmark, considered the symbol of Antalya. The minaret was constructed between 1219 and 1236.
Image by Rainbow Demon on Flickr under Creative Commons License.
Sight description based on wikipedia
6

Yivli Minare Camii also called Alaaddin Camii and Ulu Camii is a historical mosque in Antalya. The mosque's fluted minaret, which is decorated with dark blue tiles, is a landmark and symbol of the city. The mosque is located in Kaleiçi.

The mosque was first built in 1230 and fully reconstructed in 1373. The minaret is 125 feet high, built on a square stone base, with eight fluted sections and has 90 steps to the top. The first building may have been a Byzantine church originally and may have been converted into a mosque around 1225-7, during the reign of the Seljuk sultan Ala ad-Din Kay Qubadh I. The original mosque was destroyed in the 14th century and a new mosque was built which, with its six domes, is one of the oldest examples of multi-dome construction in Anatolia. Today the building houses the Antalya Ethnographic Museum and contains clothing, kitchen utensils, embroidery, tapestries and looms, socks, sacks, kilims, ornaments, and nomadic tents. It was opened to the public in 1974.

Image by Simm on Wikimedia under Creative Commons License.
Sight description based on wikipedia
7

The Tekeli Mehmet Paşa Mosque is a mosque in the city of Antalya. Built in 18th century in the Kalekapisi district, the mosque is one of the most important Ottoman mosques in the city.

The main dome, which rises on a high rim, is supported by three semi domes, one each in the east, west, and south directions, as well as three domes on the northern side. There are tiled panels decorated with Koranic verses in taliq script on the pointed arch-formed lunettes of the windows on the northern facade of the mosque and inside it.

Image by roblisameehan on Flickr under Creative Commons License.
Sight description based on wikipedia
8

The Murat Paşa Mosque is an Ottoman mosque in the Muratpaşa borough of Antalya. It was commissioned by Grand Vizier Kuyucu Murad Pasha in 1570 and is covered with a high dome upon a ten-corner frame, with the inscriptions on its inner walls running all through the internal facade in a ribbon while presenting the most beautiful example of the Turkish-Seljuk art of calligraphy. The altar next to the marble pulpit worked with reliefs is a simple construction. The last congregation place is covered with three domes rising above pointed arches of colored stone on four round columns.
Image by Ont on Wikimedia under Creative Commons License.
Sight description based on wikipedia

The principal appeal of Antalya is its wonderful natural splendor. Antalya boasts the finest Mediterranean climate: long summers, mild winters, and plenty of sunshine. Take a trip to this wonderful destination. The natural chic of Antalya is perfectly harmonized by its various ancient features. Kaleiçi is the heart of Antalya''s historic past. Check out this list of the top tourist...  view more